4DPO and another weekend busy weekend!

Here is my test from this evening, 4DPO and 6DP Trigger, faded a LOT! Although I was told this afternoon to watch out for the OSOM tests when testing out a trigger because of their sensitivity its possible to get faint positives beyond the normal 8-10 days past trigger which can give false hope. So I will have to confirm with another brand before I get too excited!! :) 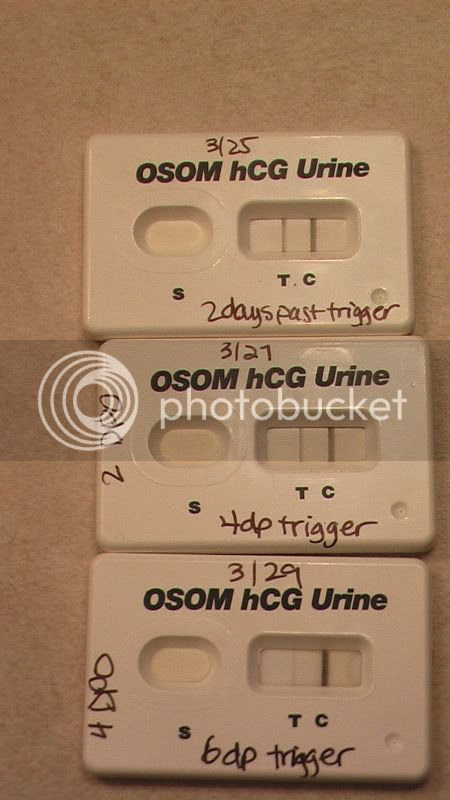 Yesterday was awesome and crazy busy!! It was great!! In the morning I went to Vicki's house where she was hosting a Lia Sophia jewelry party and got to meet her mother and her cousin and a few of her friends. The jewelry was beautiful and it was wonderful to meet some of her family and just hang out a little, and get to see her home. Around 1:00 we headed over to the Dinner Afare and prepared 12 meals - that was really cool! The set up was really neat, super easy and fun to put everything together and I cannot wait to try them all out! A bunch of really nice meals that I just would never take the time to try at home.

It inspired me to actually create a menu for this week! We did some shopping at Target today so we're using a bunch of food from shopping and won't try the Dinner Afare ones out until probably next week or maybe this weekend.

In any event, after the Dinner Afare prep I was starving (it was after 3:00 and we hadn't had lunch, just some munchies at Vicki's house during the party). I ran through a drive through for some quick late lunch and headed home. Once I got home we decided to go ahead and take the stray we found to the shelter, he really looked like someone's dog and we wanted to make sure he got the chance to find his family if he was from around here (the fact that he wasn't that hungry when we found him, he wasn't thin, and his nails looked trimmed made us think that he must belong to someone). In any event, we turned him in and they told us they'd gotten a phone call from someone who's dog ran away during the storms and said their dog was a german shepherd - we're hoping that was his family!

Then we turned around and came home for a short rest before getting back in the car and heading over to John & Vicki's for a really nice dinner (ham, macaroni & cheese, green been casserole and peach cobbler). After dinner Vicki and I lounged on the couch and watched the boys wear each other out (they had a blast bopping each other with lightweight balls and playing with trucks and trains). Kenneth and John talked about "boy stuff" and eventually we realized it was after 10:00 and time to get going, poor Johnny looked like he was about to fall over!!

Today we ran some errands, watched some shows and generally were lazy!! :) It was a great weekend and I'm looking forward to another busy week which will hopefully go by QUICKLY!! :D
Email Post