I decided to try a new basic biscuit recipe for a weekend breakfast - I have had pretty good luck with biscuit recipes on AllRecipes.com and this one was another good, reliable go-to recipe that I'm sure will be called upon every now and then! 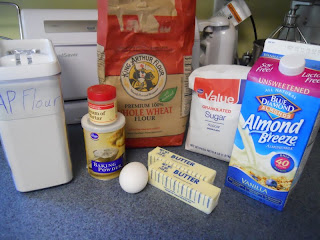 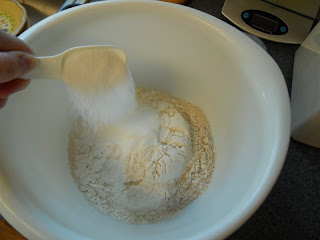 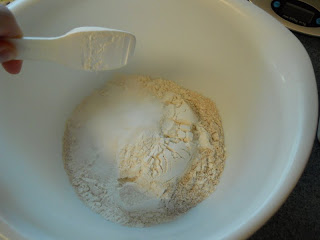 The flour, sugar and baking powder were poured into the bowl.

The cream of tartar came next and I stirred the dry ingredients to combine.

I cut up the butter and added it to the flour mixture.

Once the butter was cut in, the mixture resembled coarse crumbs.

The milk and egg were combined in another container.

I poured this into the dry ingredient mixture.

I stirred just until combined.

The counter was lightly floured.

I dumped the dough out and kneeded a couple times until all the dry and wet ingredients were evenly mixed. It was a little tacky still.

I floured the rolling pin and gently rolled it out.

I used a large juice cup dipped in flour to cut out the biscuits.

I gently combined the leftover dough.

And I cut out a few more biscuits and added them to the baking sheet.

You can see the one on the far left was the last of the dough, patted together by hand!

That one came out HUGE!! Big fluffy biscuit!

The rest came out with a nice light brown crust and the perfect thickness.

We served them up a few different ways, egg and cheese, with some honey and with sausage and cheese - just the way we each like it! :) Very easy recipe, and I thought they came out very nicely and worked well for what we used them for.
Recipe from allrecipes.com

In a bowl, combine the first six ingredients. Cut in butter until crumble. Combine egg and milk; stir into crumb mixture just until moistened. Turn onto a floured surface; knead 10-15 times. Roll out to 1-in. thickness; cut with a 2-1/2-in. biscuit cutter. Place on a baking sheet. Bake at 450 degrees for 10-15 minutes or until golden brown.
Email Post
Labels: recipe