Today we are 3dp3dt! I wasn't sure how much I was going to post during the 2ww about how I felt day to day, then I looked back at my posts from my last transfer and realized how similar some of the things I'm feeling now are and thought it would be fun to capture everything each day this time as well!!

I felt pretty much "normal" the first two days (day of and the first day after transfer) - but once I was home after transfer I spent most of the afternoon/evening resting other than fixing dinner and helping Kenneth a little with whatever he needed since he wasn't feeling so great that day. Same for Thursday, I spent most of the day resting/lounging and didn't feel much crampiness at all until the evening when I was up a little bit. When I was laying and my feet were up I didn't really notice it. Yesterday and today it's mostly the same, I feel it sometimes when I'm resting, but mainly when I'm sitting or standing I feel a "heavy" full and bloated sensation in my lower abdominal area. A few twinges, but nothing big that I've really noticed yet, just that bloated and crampy feeling.

I know people will often feel this way whether they're pregnant or not, and it will drive you crazy!! It's weird that it doesn't start until transfer - you'd think if it was related to the progesterone, it would start right after you start progesterone! But no, it waits until after there are embryos on board and you're hyper aware of every sensation, every feeling and wondering if that means right now there's an embryo making itself at home in your womb! I just cannot WAIT to find out....!! And because I cannot wait, I went ahead and already tested this afternoon... yes, everyone together smack their foreheads with me. It is only 3dp3dt. That is ridiculously early. The earliest I've gotten a positive was 6dp3dt and that was a fresh transfer. With my FET our positive was 7dp3dt, so I'm really not EXPECTING to even be ABLE to see anything until maybe Wednesday or so... but will that stop me from trying? Heck no!! That's why I bought a ton of cheapie tests - to satisfy the POAS urge!! :D I am actually having to stop myself from testing again tonight... The one I took at 4pm is STARK white, which it should be. Unless Jenn and Chad's baby to be split 4 times and already implanted, there is no reason I should be getting anything on an HPT tonight... however, logic has failed to reign supreme today. Sigh. Oh well, as I told my husband when he pretty much told me I was wasting tests, that's why I got a bunch of the cheap tests - so I can at least mostly guiltlessly appease the need to POAS! I do know from experience that it gets old FAST seeing negatives day after day and I really shouldn't have started this soon - once you start you cannot stop. I think it's a rule somewhere. If it's not, I'm making it one. :)

In any event, I have also discovered in testing today (just for practice!) that my fantastic new camera has such great resolution I can zoom the HECK out of the test and REALLY get up close and personal! 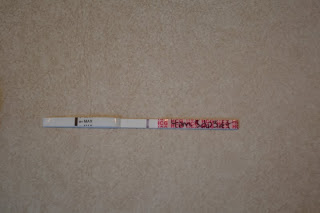 Above is the original picture.

And here it is cropped and blown up!! A little fuzzy, but WOW!!
Email Post
Labels: gestational surrogacy