Baby on Board! Transfer Today!

It still feels incredibly surreal, all of it really, but transfer did indeed happen today! Jenn and I were going back and forth via text off and on all morning waiting to see if one or the other of us had heard SOMETHING from the clinic, and when it got to about 9:45 and I hadn't heard I called ACRM. The person who answered the phone said "Didn't I just talk to you?!" I said no and she said she had just talked to Jenn and told her as well that yes, we were on the schedule and would transfer today! I texted Jenn and she said she was trying to confirm with our nurse coordinator since it seemed odd that we would get the news by calling ourselves and from the person answering the phones. Tammy, our NC, wasn't available but Jenn got put through to the OR and they also confirmed transfer was to happen! So by then it was probably about 10:15 and I had a half hour to wrap things up and then head over. Jenn and I both had that "is this really happening" feeling - it was just weird that no one had called us and we had both been anticipating a Friday transfer - Jenn said numerous times when they talked to her about it they referred to it as a 5-day, etc. But nevertheless, there we were and it really, truly was transfer day!! We still hadn't heard anything about how the embryos were doing, and what to expect and were keeping our fingers crossed for good news! We were sent to the OR/embryology department which is separate from the main office. We were buzzed in and showed to a room where we could change into a hospital gown for me and scrubs for Jenn (complete with paper booties, a hair net and a mask for her!) She filmed a little of the getting ready, inclulding my "Got Luck" green clover socks and my "The Dr. Knocked Me Up" shirt which I've worn for all my transfers!

Around 11:45 we were taken back to the room - it was dimly lit and very chilly but fairly large in size. I was situated on the table and the nurse checked the ultrasound image to see if my bladder was full enough. She couldn't quite get the right shot, so I had to end up chugging about 64 more ounces before they were happy with the view! Thankfully though she wasn't pressing directly on my bladder, so I didn't feel like I might pop while they were doing the actual transfer. I did however start shivering like crazy, especially when they had the sheet pulled up to my stomach so they could have the ultrasound guide on my belly and have clear access to everything else needed for the transfer procedure!! Brrr!!! It moved pretty quickly though, once the RE had everything in place, she called for the embryologist and he brought in Jenn and Chad's beautiful little 3-day 7-celled grade 2 embryo (the other three didn't make it! :( ) and Jenn watched and filmed as the tiny little "blob" was gently deposited where they wanted it in my uterus! It's a very cool thing to get to watch. I didn't actually see the screen this time, but it was fun to watch Jenn's face and I could tell the moment she could see the embryo!

I laid on the table for about 10-15 minutes and we chatted, then they let me up to use the restroom and we changed and Jenn took me to lunch at my favorite veggie restaurant - Cafe Sunflower! We had a very nice lunch and I gave her the "2WW Survival Kit" I put together for them with a note. Now we hope the next week flies by and that when it's time to start testing we are seeing DOUBLE soon!!! Fingers and toes crossed!!

I was told I'm not on bedrest, but "house arrest" through tomorrow and back to normal on Friday, so I don't have to stay in bed, but just take it easy. With Kenneth being laid up right now too though, I'm sure we'll spend most of tomorrow resting which I'm more than fine with. This little baby and I can have some good one on one time to discuss just how comfortable he or she will be if they choose to stick around and just how very loved and wanted they are and that we all can't wait to meet them in another 8 months or so!! :) Hang tight little embryo, you've got some busy work to do - divide and snuggle in little one!! 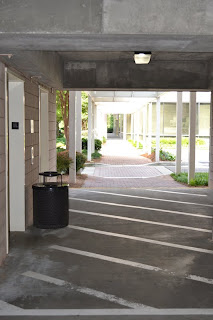 Walking from the parking garage to the main building... 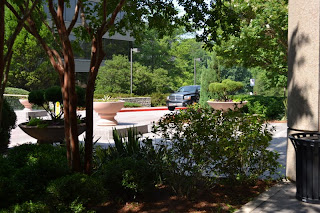 Lots of pretty green at this office park! 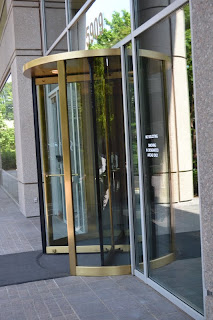 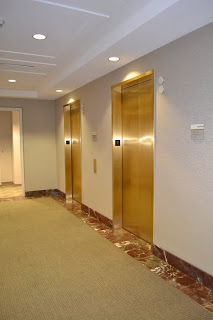 The elevator bank on the 7th floor - almost there! 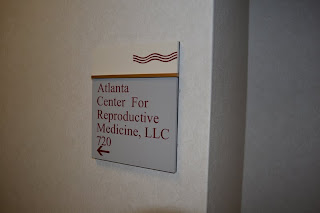 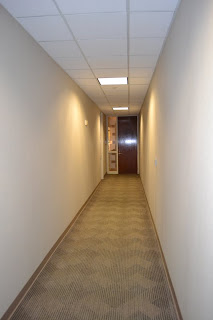 The corridor leading to ACRM's office. 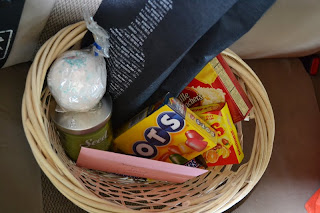 This is the "2WW Survival Kit" I put together - not much, but a bottle of our favorite wine, a Lush bath bomb, a yummy green apple soy candle and some munchies for enjoying with their favorite show or movie along with the card. :)
Email Post
Labels: gestational surrogacy