(For those who are feeling heart and health conscious right now, please avert your eyes!!)
I believe the inspiration behind this occasional family weekend breakfast favorite came from Denny's scrambles! When I lived in Washington State there were many occasions for a Denny's visit - sometimes for a family gathering at breakfast, sometimes for a hang out with friends into the wee hours of the morning where our order usually consisted of a fried foods appetizer and often a slice of one of their yummy pies and lots of cups of coffee! I have many fond memories of meals shared with those I love at Denny's. One of the things I loved to order most was a breakfast scramble that had seasoned potatoes topped with meat, cheese and a fried egg (if I remember right)! This evolved at home into fried diced potatoes that were combined with sausage which had been cooked with onion and peppers and then a cozy blanket of cheddar cheese topped it all off. The boys really enjoy this one, and though I tend to pick most of the sausage out of mine since I am still not a fan, even though it seems I cook with it every other day of the week, I really enjoy everything else about it! Especially with a helping of ketchup to dip the yummy potatoes in! :) 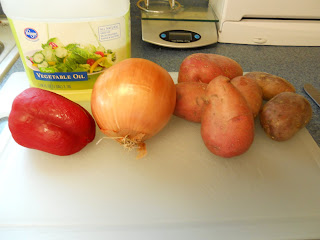 This one starts out pretty simply - vegetable oil to fry the potatoes in, about 5 small/medium potatoes, a bell pepper (your choice of color) and a medium onion. 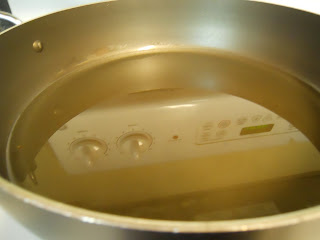 I put maybe about 1/2" of oil in the bottom of my largest non-stick skillet and let that heat over medium-high heat while the veggies get diced up. 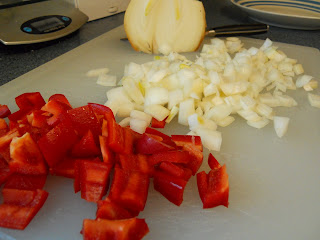 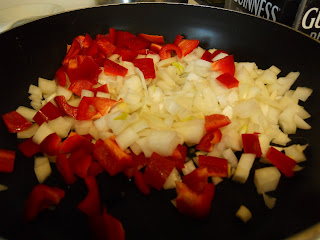 Ha ha - gotta love the background scenery in this one! Hubby's 6-pack of Guinness on the counter, which I actually bought to make a very amazing sounding cake sometime in the near future! 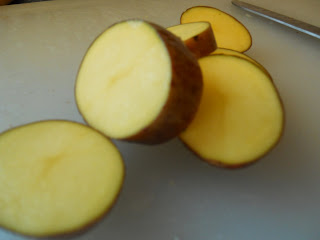 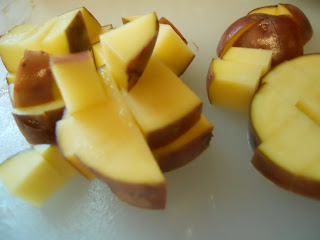 I diced my potatoes up fairly small and then tossed them in the hot oil! 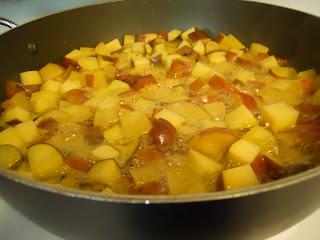 I set the timer for 15 minutes and let those brown, stirring occasionally. 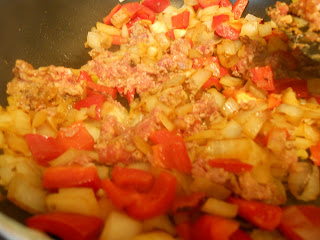 Meanwhile the ground sausage and diced pepper and onion were combined in another skillet and sauteed over medium heat. 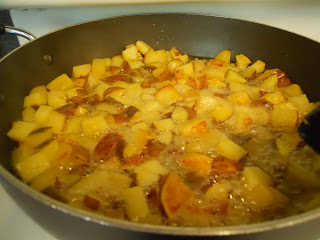 After about 15 minutes the potatoes were getting some good color on them! 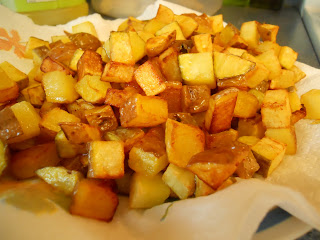 I put a layer of two paper towels on a plate and carefully strained the cooked potatoes out to drain some of the grease off. 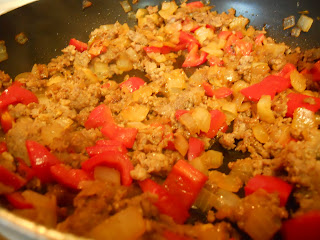 The meat and veggie mixture was ready now too! 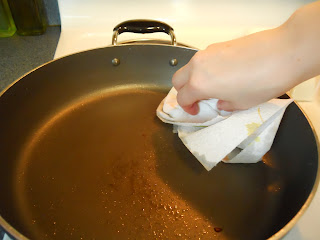 I carefully dumped the hot grease and wiped the pan out with a clean paper towel. 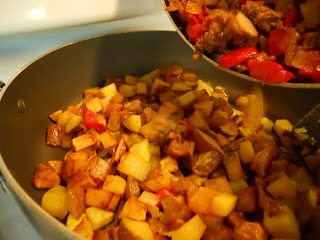 The potatoes went back into the pan, followed by the meat and veggie mixture. 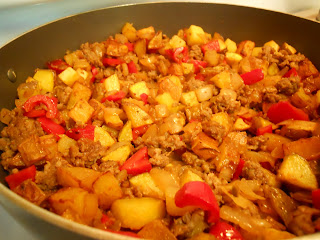 I gently stirred to combine the mixture. 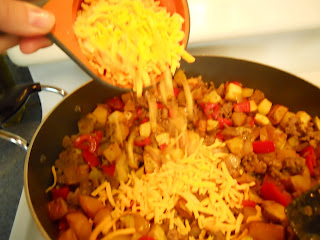 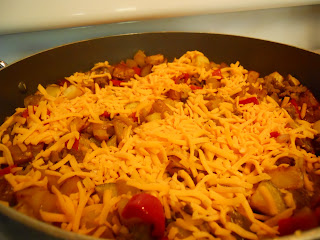 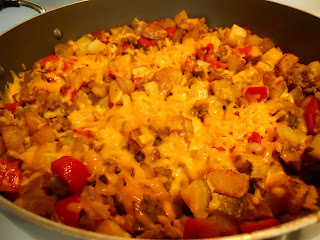 And then came the cheese, gently sprinkled evenly over the top and then covered with a lid and allowed to sit (over low heat) for about 5 minutes until the cheese was mostly melted. 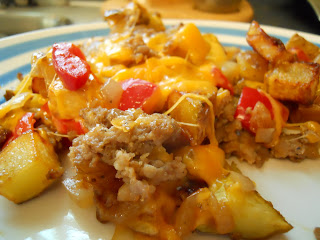 ﻿The final result is an ooey, gooey, tasty scramble of potatoes, onion, pepper and sausage all glued together with cheddar cheese! Throw a fried egg and some ketchup on top and now you're really talking! :)
Ingredients:
Oil for cooking potatoes
5-6 small/medium red potatoes, with skins, diced small
1 large onion, diced
1 pepper (your choice of color), diced
1/2 lb ground sausage
1 - 1 1/2 cups shredded cheddar cheese
Directions:
1. Heat oil over medium-high heat in a large skillet. Add potatoes when hot enough to sizzle when potatoes are placed in the oil. Set timer for 15 minutes.
2. Meanwhile combine ground sausage and diced onion and pepper in another large nonstick skillet and cook until sausage is no longer pink and vegetables are tender, 15-20 minutes.
3. Once potatoes are cooked through and lightly browned, remove from heat and carefully strain onto a paper towel lined plate.
4. Dump grease safely and wipe pan out with a paper towel.
5. Put potatoes back into the clean pan and add cooked meat and veggies, gently stir to combine evenly.
6. Top with desired amount of shredded cheddar cheese, cover with a lid (turn heat to low) and allow to sit about 5 minutes until cheddar is mostly melted. Serve and enjoy!
Email Post
Labels: breakfast pork recipe