I am super excited to share the news I got to share with Jenn and Chad last night... 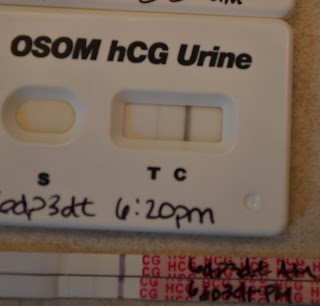 The evening of 5dp3dt the OSOM wasn't really showing anything by the time I went to bed, but there was a VERY faint line visible in the morning and I was so nervous and excited to take the next test yesterday AM. 2 positives on the OSOM and Wondfo, again very light but definitely there!! I tested again in the evening just before 6:30pm and the line was visibly darker and pretty easy to see. Jenn had texted me earlier that morning that she was worried about little chadifer and though I was hoping to have a digital positive HPT to insert into the slideshow I put together for them, I was torn about waiting because it seemed like Jenn really wanted to know if there was news to share! So I inserted the pictures I did have of the positive tests and sent the link to them.

They called and I missed it but had a hilarious message to listen to of Jenn and Chad saying they think they were excited, they think the test was positive but they weren't sure and call them back! :D I did and e-mailed them a picture too so they could look at it without it moving and point out where the test lines were on the HPTs. Jenn was saying even though they're both doctors this is all new to them!! It was a very fun conversation and a wonderful moment to share. Now I am just sending TONS of positive thoughts out to little chadifer that they GROW GROW GROW healthy and strong and that we have a great beta next Tuesday! I am so hopeful to have another smooth and happy pregnancy and cannot wait to see how things go!!! Fingers crossed the lines just get darker and darker between now and beta day!! :)

As to how I'm feeling - already having to pee more frequently, my appetite is all wonky (I totally skipped lunch yesterday and didn't even REALIZE it until after 2pm but wasn't hungry so I didn't eat again until dinner). My lips are really chapped all of a sudden and I still have that funky nasty metallic/icky taste in my mouth most of the time. I am tired now too but not sleeping so great, probably because I keep waking up around 2 or 3am needing to pee again. As a surrogate, this really messes with your testing schedule!! You want to let the urine build up all night and test with First Morning Urine (FMU) when you normally wake up so the hcg will have had plenty of time to build up in your system - waking up to use the bathroom about 5 hours after you go to sleep messes that all up!!! :) Still having a lot of achy dull crampy sensations as well - it's almost a constant sensation of swelling almost. So there's definitely a baby or two in the makings and I am just so hopeful and excited for this pregnancy to continue and see how it all goes!!! YAY!!!!
Email Post
Labels: gestational surrogacy