It's been a wonderful and busy weekend. I've still been fighting off whatever cold bug has ahold of me at the moment, but mainly it's just meant I'm a little extra tired and get a tickle in my throat and cough every now and then.

I came home from work a couple hours early on Friday and took a nap, did some cleaning that evening but mostly took it easy. On Saturday I fixed cinnamon and orange rolls for breakfast as a treat and then we spent most of the day working on the house. It felt GREAT to get so much done, all of those things we have a tendancy to put off and ignore. The house looks good, and I am so much more comfortable and relaxed when things are clean.

I put the ribs in at 200 degrees at about 11am and we let them slow cook all day. I forgot to fix the pound cake before cooking the ribs, so I had to pull them out around 5:00 so I could have an hour to bake the pound cake (Tastefully Simple Absolutely Almond - FABULOUS!) John, Vicki and Johnny arrived a little after 6:00 and the boys played a little while I put the biscuits and macaroni in to bake and turned the corn on to boil. Kent was being a pain in the BUTT off and on last night!! He was not "playing nice" with his toys - and he's way too old to get away with that, so we had some "discussion" about being a good host. I was not impressed. Kenneth finished the ribs off on the grill and we sat down and had dinner. It was really nice to get to cook for guests - we haven't had anyone over in a long time, not sure why, guess we've just been lazy!

We took the boys outside for a little while and Johnny had fun on the play set, running around and going down the slide (or FLYING off the slide!!) :) Eventually it got pretty cool out, so we headed back in for some strawberries and whip cream on the almond pound cake and then a little more hanging out, boys playing, and chatting. Johnny LOVED our little dogs, and I got some super cute pics of the boys with the dogs on the couch: 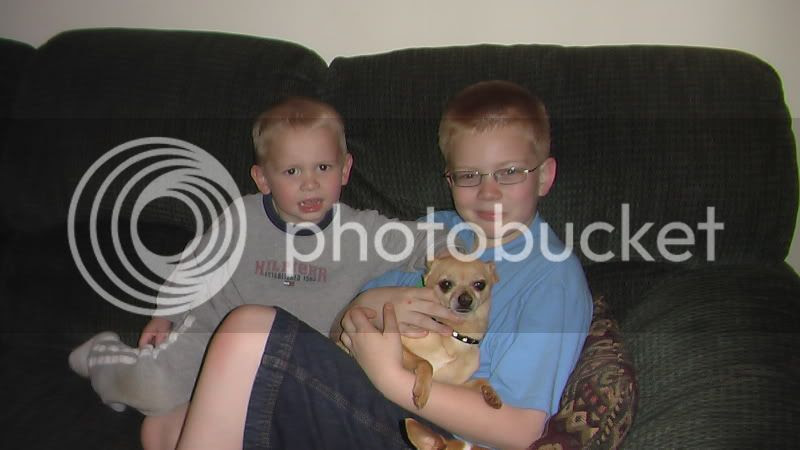 L.B. has no ears, so Kent thought he'd give him some bunny ears... 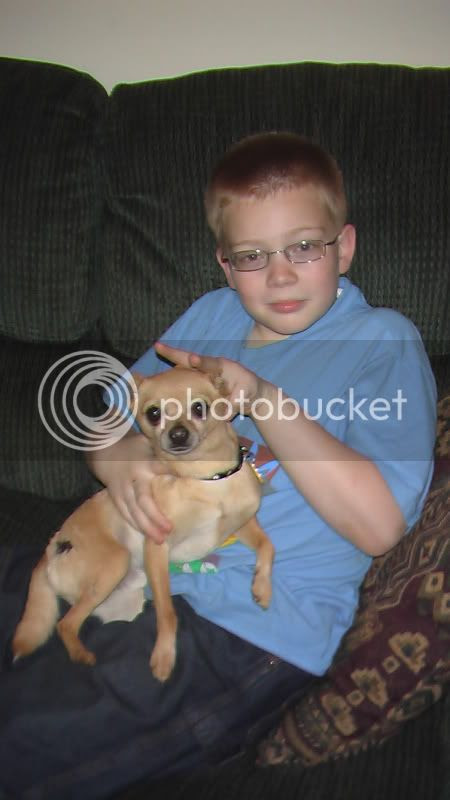 Johnny being way too cute with L.B.!! 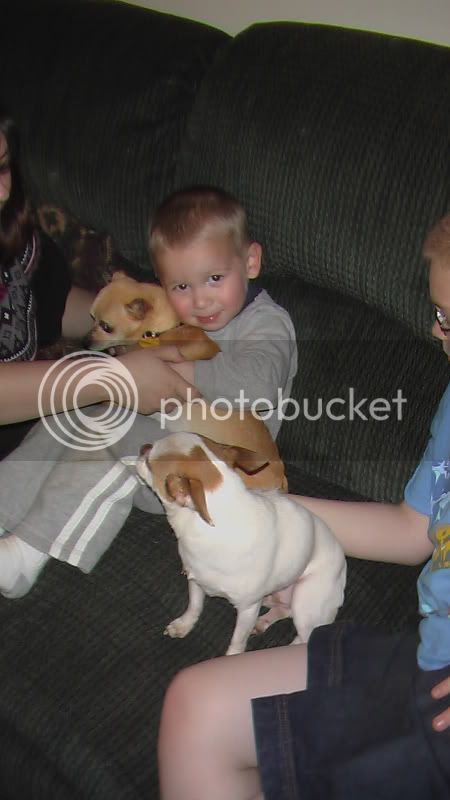 I felt bad, because it seemed it was hard for John & Vicki to relax with keeping up with Johnny in an unfamiliar environment but I am very glad they came (and hope they are too!) and hope maybe if we get together a few more times it will be a little easier each time! :)

We never did fill the giant vase/margarita glass up with anything to drink, but I had it out on the table, just in case! :D

Today was another busy day, I wished we could have taken it easy at home but being Easter we had a family get together with Kenneth's family, we went to his parent's house around noon and Kent got to go on an egg hunt (he LOVES egg hunts)! Around 1:00 we headed over to Honey's (Kenneth's grandmother) and everyone brought a dish or two and we had a very yummy big lunch (I stuffed myself, it was so good)! We had honey baked ham, corn casserole, broccoli casserole, crescent rolls, fruit salad, sweet potato soufle, mashed potatoes, green beans, green salad with strawberries and cupcakes and peach cobbler for dessert... LOTS of food... That's what we do - get together to eat and chat! :) The kids ran around outside a lot too - it was beautiful today!

So, that was our weekend! Looking forward to another busy week at work and then another fun and busy weekend. Vicki and I are doing Dinner A'fare next Saturday AM and then meeting Kenneth in Hampton for the Texas Hold 'Em tournament... now to see if I can convince John & Vicki to come! :)