Fingerprints have formed on your baby's tiny fingertips, her veins and organs are clearly visible through her still-thin skin, and her body is starting to catch up with her head -- which makes up just a third of her body size now. If you're having a girl, she now has more than 2 million eggs in her ovaries. Your baby is almost 3 inches long (the size of a medium shrimp) and weighs nearly an ounce. As you start your second trimester, most of your baby's critical development will be completed and your odds of miscarriage drop considerably.

I started out my day with almost an extra hour of sleep, however it barely made up for my stinkin' phone having an alarm go off at MIDNIGHT!! I have NO idea how that happened - but I wasn't thrilled about it. Then Kenneth had to get up extra early too, so not un-interrupted, but still a little extra sleep was good. Ran an errand this morning and threw dinner in the crock pot before heading off to meet my IM at the Maternal Fetal Diagnostic Center for our nuchal screening. 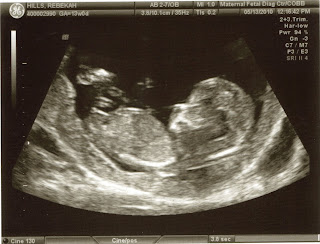 This little one is a total laid back guy or girl!! They were in "lounge position" the whole time; we got a nice long ultrasound (but mainly because baby just wouldn't MOVE to give the tech some space between the bottom of the uterus and his/her head to get a good nuchal measurement!!) She kept BANGING on my stomach with the stinking probe! (Didn't really help, baby could've cared less it seems!)

At the very end baby seemed to wake up from their nap and was throwing arms and legs all over - so CUTE!! We got some sweet profile shots and a funny alien looking baby full face view. It was awesome to get to watch my IM watching her little one on the screen, and we asked pretty please if the tech would take a peek between baby's legs and she did agree to try, though she said it was really too early. She couldn't get a good angle and with the shot she could get she said there was a bunch of cord between baby's legs which wasn't helping.

Our review with the NP after the ultrasound went well - she was shocked at my IM's story, most seem to double take over her story! Once we got past that, she said everything looked good. The only bad news is that I have a placenta previa and am on full pelvic rest until we get an ultrasound showing its moved, though they all seem to think it should move as the uterus continues to grow and aren't worried about it at this point. My hubby won't be so happy though! (And I admit after doing a little research it makes me a little nervous, so I will be sending "MOVE YOU DANG PREVIA thoughts towards my uterus, any extra thoughts of a similar nature you have to spare would be appreciated! :) I told my IM positive thinking and energy has gotten us this far, we'll stick with that and trust by the next ultrasound in a month the previa won't be an issue)!

We did the first part of the lab screening, just a finger poke and 6 little spots of blood on a sheet. The next phase will be a blood draw when we go back in 4 weeks for a follow up and a fetal echo (since my IM's AMH level's were low they are screening baby a little more carefully - one RE told her because of those levels baby is at a higher than normal risk for down's and possible other chromosomal abnormalities).

We were there for TWO AND A HALF HOURS because they were running so far behind, so eventually we got out of there and grabbed some lunch at Taco Mac (YUMMY burrito!!!) and then headed to my OB's office for my "First OB" appointment with the midwife. We waited for all eternity and eventually went back and I got weighed, peed in a cup and had my BP checked - all was good. Then we waited some more for Chastain - my midwife. She listened to baby's heartbeat on doppler and said baby sounded great, did a breast exam on me and we chit chatted awhile. She was also taken aback by my IM's story and was very happy for us that things were going well! She said everything looked great and we all plan on a BORING pregnancy and delivery experience this time around! I think my IM "L" is really looking forward to that, getting to be fully present for the delivery and for her newborn.

"L" headed out after the appointment was done, and I went back to the lab and got my first trimester prenatal bloodwork drawn and made my next appointment (both u/s and next OB appointment are for June 10th). And that was all she wrote!! Happy to be home again, I've been a little crampy since the u/s and all that banging she did, so its nice to put my feet up and sip some water!

YAY for a fun day and it was great to spend so much time with my IM!
Email Post
Labels: gestational surrogacy pregnancy