On my 30th birthday (ACK!!) which was June 12th that morning I decided to make something "new" for fun, to play in the kitchen a little and enjoy my morning (since my birthday wish list was 99% kitchen stuff, this is not surprising, I am sure!) I can't remember how we decided on pork chops and cinnamon apples, but we did - I think because I had thawed some chops out a couple days before with plans to do something else that I never did... it's entirely possible! In any event, I dug around on AllRecipes a little and found this recipe which looked perfect! An Oven Fried Pork Chop recipe - baking but still getting that moist and tender chop with a crunchy coating - or that's what we were hoping for anyway! I read through a couple reviews to get some ideas on what might help make that happen best and decided to add the step of flouring the chops prior to egg wash and breading them, I used bread crumbs instead of the stuffing mix called for in the original recipe as well. I think stuffing mix would work great as well, but these were for breakfast so I wanted to go with breadcrumbs! 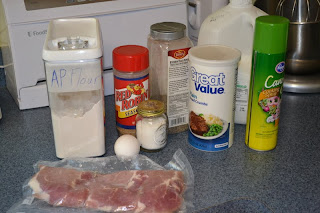 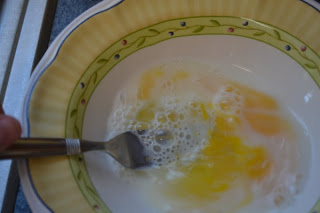 Whisked up the egg and some milk in a bowl and set aside. 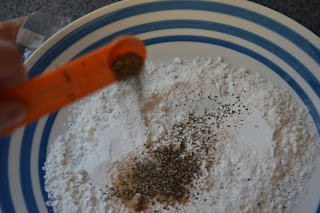 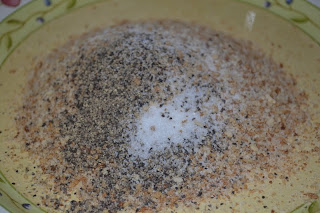 Seasoned breadcrumbs with salt and pepper. 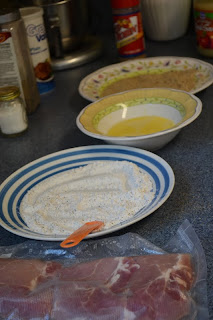 Everything lined upand ready to go! Chops, plate with seasoned flour, bowl with egg wash, and another plated with seasoned bread crumbs. 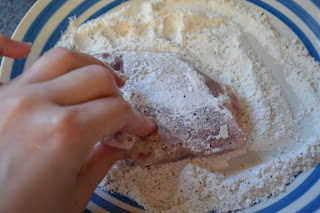 Started off by pressing the chop into the flour all the way around. 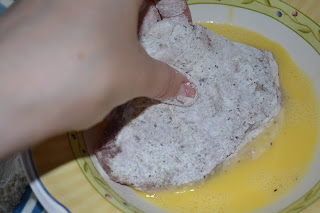 Next into the egg wash! 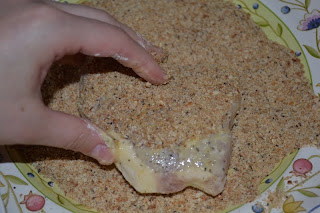 Followed by a good coating of breadcrumbs. 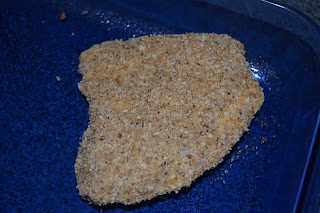 First one in the pre-sprayed pan! 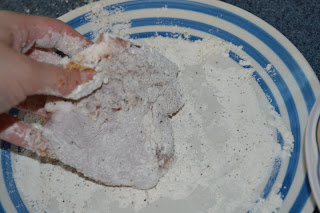 Next! Ok, my fingers are getting some serious breading build up by this point. 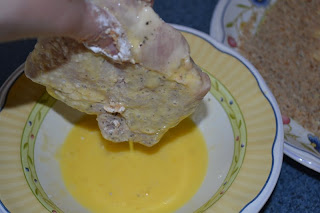 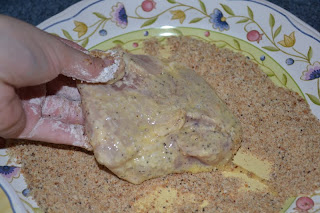 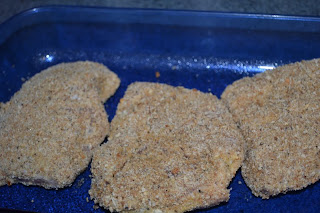 All three chops beautifully breaded and ready for the pre-heated oven! 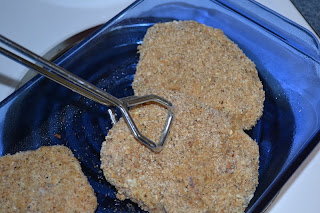 After the first 10 minutes I pulled them out and flipped them, trying not to disturb the coating too much. 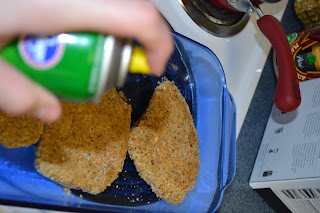 Following a user suggestion, I sprayed the chops quickly with cooking spray before putting them back in the oven. 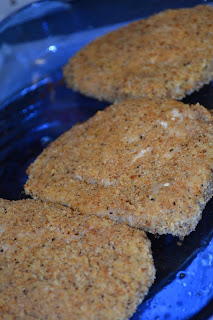 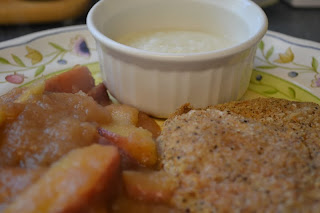 Plated up with homemade cinnamon apples and some grits for a hearty and delicious breakfast! 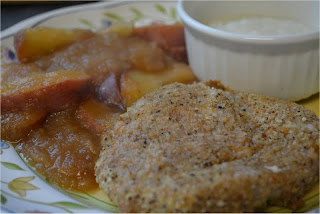 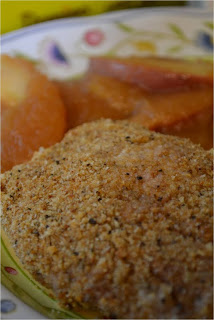 The breading was perfectly crisp, and kept the chops moist and tender. 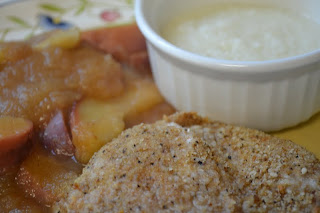 This was a great meal and a wonderful recipe! I really enjoyed it with the small changes I made to the original recipe. The meat was tender, moist and flavorful, and the breading was crunchy and came out perfectly! I did have to put the chops back in for 10 more minutes as they were still a little pink in the middle, so cooking time might be up to 30 minutes depending on the thickness of your pork chops. They were great with cinnamon apples for breakfast and would be equally perfect paired with your favorite mashed potatoes and veggies for dinner - I am sure we'll use this one again!
Oven Fried Pork Chops (slightly modified) Original Recipe By: RACHELHACKER from AllRecipes.com

Put flour, 1/4 tsp salt and 1/4 tsp pepper onto a plate, pie plate or large bowl and stir to combine. In a separate bowl, whisk together egg and milk. Place bread crumbs with salt and pepper in a separate bowl or plate and line them up, chops, flour, egg wash and breadcrumbs.

Press pork chops in flour mixture, then egg mixture and then press into seasoned bread crumbs and and place in prepared baking pan.

Bake in preheated oven for 10-15 minutes. Turn chops gently, spray quickly with cooking spray and return to oven and bake for another 10-15 minutes, or until no pink remains and juices run clear.
Email Post