Thinking about a potato side dish for dinner? Want to try something a little different than a baked potato to change things up? Then you should most definitely give this one a shot! Flavorful, absolutely delicious and LOTS of crispy crunchiness to compliment the tender chunks of baked potato - this is a keeper for sure! Kenneth and Kent both really liked these as well; I think they are a really great alternative to a traditional baked potato and you have SO many options for how to finish them off - I think next time a sprinkling of bacon pieces and cheddar cheese for the last 5-10 minutes in the oven would be great, some sour cream on top would also be great; or just eat them exactly as the recipe calls for below. You won't be disappointed! 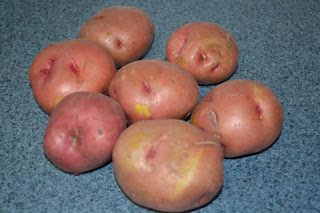 I started with about 8 smallish red potatoes. 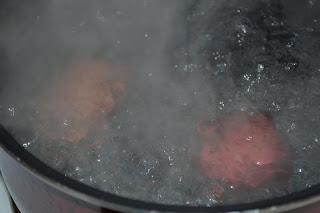 Plopped them all into a large pot of boiling water and let it cook for probably a half hour before they were fork tender. 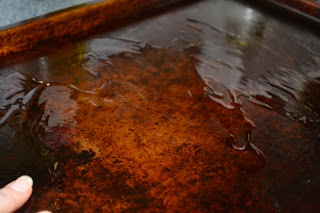 I prepared a cookie sheet with olive oil which I spread with my fingers so it was evenly distributed. 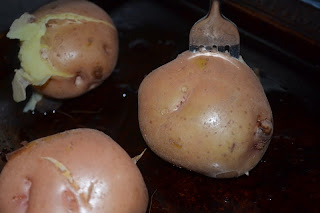 Then I pulled the potatoes out of the water and placed them all on the sheet (some were starting to pop already)! 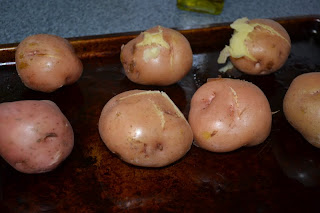 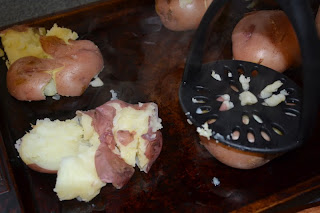 I have the round type of masher, so I only needed to press down once, not two different directions as the instructions indicate. 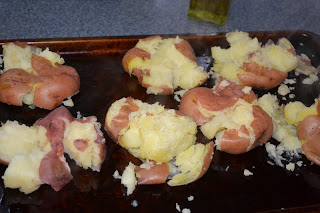 All smashed and ready for some olive oil on top! 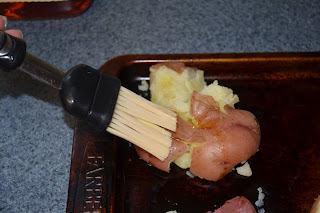 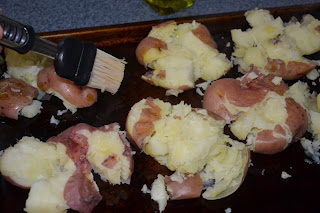 I drizzled some olive oil over the tops and then brushed and dabbed it more evenly over the surfaces. 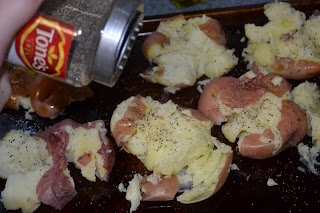 Next came a generous sprinkling of pepper. 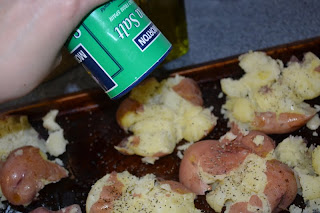 Followed by some sea salt since I don't have kosher! 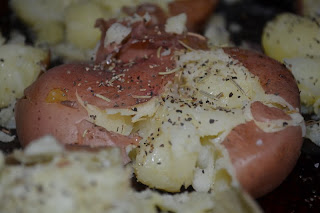 Then I took about a Tablespoon worth of dried rosemary in my palm and ground it up with my fingers and sprinkled it over the potatoes as well. Then it went into the oven! 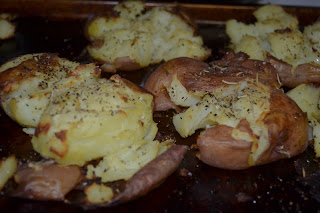 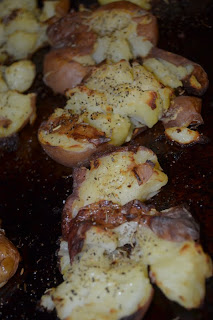 Don't they look crispy and delicious?? 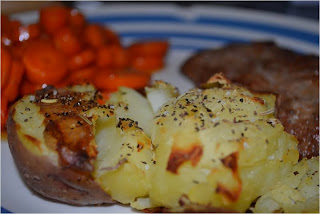 Bring a large pot of water to boil, salt the water if desired. Boil the potatoes for approximately 20-30 minutes or until easily pierced by a fork. (Watch the water level, add more if needed during boiling).

When the potatoes are almost done, prepare a baking sheet by greasing with olive oil (rub evenly to distribute with your fingers). Place the boiled potatoes on the baking sheet, leaving space between them.

Use a potato masher and smoosh them down gently to flatten slightly. They should look like lumpy potato pancakes.

Once all the potatoes have been smooshed, brush the tops with olive oil and then season with salt, pepper and rosemary (or other herbs or your choice).

Bake at 450 degrees for 20-25 minutes until golden brown and crisp!
Email Post