Week 9 has arrived! The chadifers are now grape sized, awww. :) I am actually feeling a little better the past couple days in terms of the queasiness. I've been more hungry than queasy which is a fun and interesting challenge in itself! When I actually let myself get to the point of being hungry, it is painful and very distracting and all I can think about is eating but then I have to figure out what sounds good because my stomach is still fairly sensitive/picky at this point and that alone takes me forever to figure out!

Last night I had to have a baked potato. I thought about it all afternoon and knew that's what I wanted to make to go with the leftover steak I had in the fridge. As soon as I got home I turned the oven on and put a couple in there to bake. About 30 minutes into baking I thought I was going to die of starvation. I ended up eating a bite of something to hold me over, but it is crazy how quickly I can go from fine to ravenous! Happened on the way to work this morning too! I need to just keep some nuts or granola bars in the car or else I'll be stopping for breakfast every single day of the work week. I was about half way into my commute when the stomach pains started, and they were painful and incredibly distracting and I wanted to start chewing on my arm! I made it to work, but the first thing I did was open a small can of mandarin oranges I had in my mini fridge and scarf those down with a cup of cottage cheese. That really just took the edge off though, I'm still hungry and need to figure out what else I'm having for breakfast... 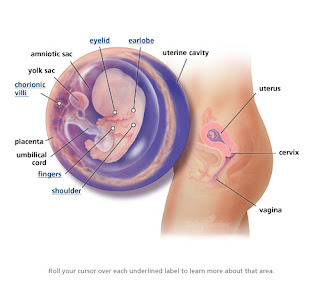 
Your new resident is nearly an inch long — about the size of a grape — and weighs just a fraction of an ounce. She's starting to look more and more human. Her essential body parts are accounted for, though they'll go through plenty of fine-tuning in the coming months. Other changes abound: Your baby's heart finishes dividing into four chambers, and the valves start to form — as do her tiny teeth. The embryonic "tail" is completely gone. Your baby's organs, muscles, and nerves are kicking into gear. The external sex organs are there but won't be distinguishable as male or female for another few weeks. Her eyes are fully formed, but her eyelids are fused shut and won't open until 27 weeks. She has tiny earlobes, and her mouth, nose, and nostrils are more distinct. The placenta is developed enough now to take over most of the critical job of producing hormones. Now that your baby's basic physiology is in place, she's poised for rapid weight gain.

It amazes me just how much is already formed and present in these two tiny people, now they just need to grow, grow, grow!

I'm counting down to Thursday, my last day of progesterone and estrogen and then looking forward to our first OB appointment next Monday! Then August will be about over, this month has really flown by!