10 weeks! Yippee! We're "double digits" today! :) Another busy week for the adorable baby chadifers. They're busy putting on some weight and size now that all the major development has occurred! It won't be much longer before we won't be able to see them both at the same time on the ultrasound screen. :) 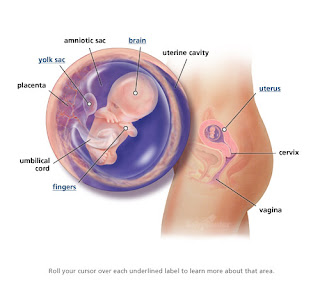 Though he's barely the size of a kumquat — a little over an inch or so long, crown to bottom — and weighs less than a quarter of an ounce, your baby has now completed the most critical portion of his development. This is the beginning of the so-called fetal period, a time when the tissues and organs in his body rapidly grow and mature.

He's swallowing fluid and kicking up a storm. Vital organs — including his kidneys, intestines, brain, and liver (now making red blood cells in place of the disappearing yolk sac) — are in place and starting to function, though they'll continue to develop throughout your pregnancy.

If you could take a peek inside your womb, you'd spot minute details, like tiny nails forming on fingers and toes (no more webbing) and peach-fuzz hair beginning to grow on tender skin.

In other developments: Your baby's limbs can bend now. His hands are flexed at the wrist and meet over his heart, and his feet may be long enough to meet in front of his body. The outline of his spine is clearly visible through translucent skin, and spinal nerves are beginning to stretch out from his spinal cord. Your baby's forehead temporarily bulges with his developing brain and sits very high on his head, which measures half the length of his body. From crown to rump, he's about 1 1/4 inches long. In the coming weeks, your baby will again double in size — to nearly 3 inches.

Jenn mentioned reading all the update e-mails from baby center and other websites and they usually comment about the physical changes the pregnant woman is going through and what you might be experiencing at various stages of pregnancy and so I decided to send her an update this morning on what the hormones from these two cutie pies equates to for me = not wanting to get out of bed in the morning because I'm completely exhausted, bursting into tears (briefly) for absolutely no reason at all in the car on the way to work, being extra annoyed at traffic and as usual very, very hungry pretty much every couple hours. :) That's about my "normal" lately! :D I am fully switched over to maternity clothes at this point. I can still squeeze into some of my pants and skirts, but it's not comfortable and I look more pregnant in regular clothes than I do in maternity which tends to be loose and flowy over the midsection so it doesn't draw extra attention. I'm planning to just tell a select few at work within the next couple weeks but then will leave it at that until the belly gives me away (which I don't think will take much more than another month from now, but we shall see)! :) Hopefully I won't be in this awkward "she looks like she's getting fat" stage for too long! I'm going to take a new belly pic tonight to compare to last week. I don't feel like much has changed, but it's always easier to see in pictures! :)

Only ONE more day in August!! Then we are down to the final 4 months of the year... the fall season is almost here! I am already debating getting my belly painted like a pumpkin around Halloween. I would think I should have a good enough round belly by then to do it, and I've never had it done before and think it would be fun! I'm debating on my Halloween costume for our good friend's annual party as well. I was very pregnant last year with my last surrobabe and went as the unholy Pregnant Nun (and delivered about a week after!) and am thinking I'm going to have to come up with something else for this year!

Here's my 10 week belly picture from this evening, not too much different than about 2 weeks ago I don't think - maybe a little more filled out - we'll see when I really start to "pop out"! :)