Today we are officially 15 weeks! Yippee! Half way to the 30-week mark which I will be very relieved to pass and then on to the "full term count down" after that! :)

Since breakfast today I have eaten a ham & cheese lunchable, a mushroom tortellini lean cuisine and just now I finished off a club wrap on a spinach tortilla with a pickle spear and a small bag of cheetos... feeding two babies is a full time job! :) I've gained just under 10 lbs so far. Almost all of that gain happened in the previous two weeks, I haven't gained anything since a week ago as of today which I was somewhat relieved about because I was beginning to wonder how long I could possibly gain nearly 3 lbs a week before my scale would break! Ok, not really, and I'm still aiming for that 20 by 20 goal I was given, which I realized I'm having a hard time with mentally. I'm used to being very weight conscientious during pregnancy and I would worry every appointment about getting the "speech" about weight gain and limiting carbs and sugar, etc. but this time although of course what I eat is very important, I am kind of supposed to be eating pretty much as much as I can handle to maintain a steady weight gain early on to hopfully sustain the babies when space starts running out and I'm not able to eat as much - at least that's the theory I'm told! :) In any event, it's hard for me to not 2nd guess what I'm putting in my mouth, to not mentally start adding up the calories, to choose a couple eggs and a piece of whole wheat toast for a before bed snack  (or 2nd dinner as I call it!) instead of a tangerine like I might normally eat... it's just a shift and hopefully I'm close to reaching the recommended goals and hopefully these two are getting all the nutrients they need to grow, grow, grow! I can't wait to see them next Friday and see how big they are now! 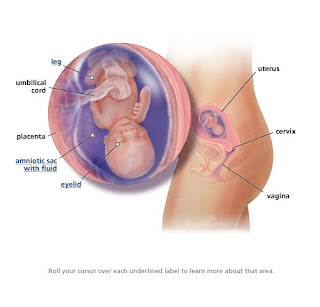 According to BabyCenter, this week:


How Jenn and Chad's babies are growing:

Your growing baby now measures about 4 inches long, crown to rump, and weighs in at about 2 1/2 ounces (about the size of an apple). She's busy moving amniotic fluid through her nose and upper respiratory tract, which helps the primitive air sacs in her lungs begin to develop. Her legs are growing longer than her arms now, and she can move all of her joints and limbs. Although her eyelids are still fused shut, she can sense light. If you shine a flashlight at your tummy, for instance, she's likely to move away from the beam. There's not much for your baby to taste at this point, but she is forming taste buds. Finally, if you have an ultrasound this week, you may be able to find out whether your baby's a boy or a girl! (Don't be too disappointed if it remains a mystery, though. Nailing down your baby's sex depends on the clarity of the picture and on your baby's position. He or she may be modestly curled up or turned in such a way as to "hide the goods.")

Of course we've already been told Jenn and Chad have twincesses on the way, but I'm still holding out for an updated verdict as we get further along! I hope they will check again next Friday! :)

I can't wait to get home and take an updated belly pic this evening! I feel like I am definitely showing a little more - the same sweater I wore a couple weeks ago that did a great job of covering everything up is now showing a rounded bump today and I can't wait to compare the pics and see if there's a noticeable difference from the last couple weeks! It's exciting to be growing and changing and think of how much the babies are growing and changing too! 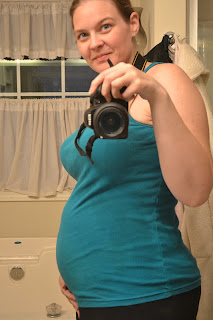