I saw the inspiration for this recipe on Plain Chicken and knew it was definitely something I wanted to try! I mean creamy sauce, pasta, cheese, and BACON?! Hello!! This dish has great potential and I think just needs a couple tweaks from how it is posted below (which is how I fixed it). I think it was actually too much bacon, and could use some chicken (I would suggest 4 oz cooked, chopped bacon and 1 lb chicken, diced, and cooked to supplement). To get to 8 oz of cooked bacon, I had to fry and dice 14 slices of thick cut bacon! That just seemed excessive to me and I think some chicken would lighten it up a little and still give you some "meat" with your pasta. I also think the sauce was a little too rich (the original recipe called for evaporated milk, but I had some half and half in the fridge and thought it would go well in this recipe). I would suggest using regular milk and/or starting with half as much cream cheese, taste testing, and adjusting from there. I ended up with a pretty thick sauce, so you may need additional broth or milk to thin.

We served this with a Caesar salad and some Texas toast for a rich, hearty, and satisfying meal! I was full really quickly - it was rich and really delicious! 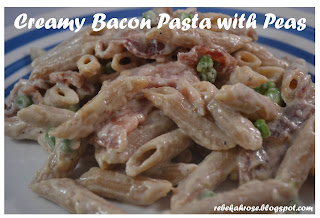 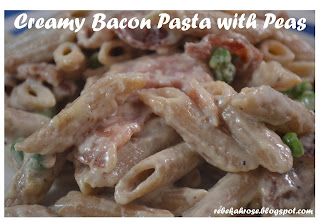