It's our official "reveal" day for baby bunny!! 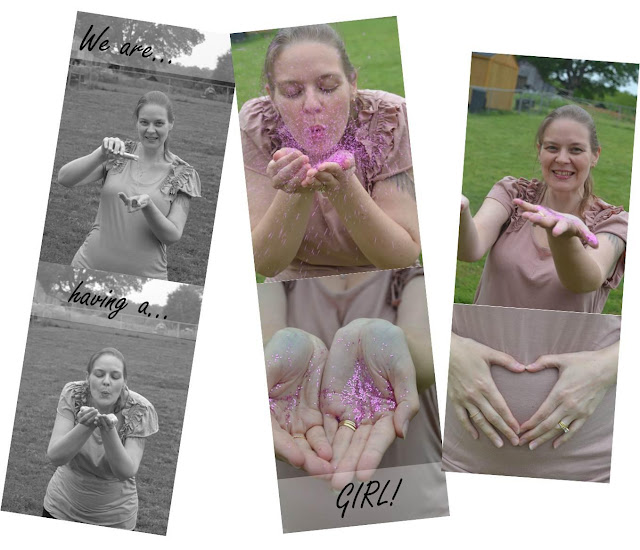 We had our anatomy scan on Wednesday, May 1st and were very excited to get to see how our little one is growing. I anxiously counted down the hours all morning until it was time to head over for my appointment. When I got there they were in the midst of a fire alarm...! So while the lovely flashing lights went off and the siren sounded, I got checked in and took a seat. The ultrasound tech came out to get me and back we went! I was so nervous with anticipation as I got settled on the exam table and prepped for the scan.

One of the first things the ultrasound tech asked is if I wanted to know gender and of course I quickly said "Yes, please!" :) We talked a little about us already having a 14 year old boy at home and I admitted we were all kind of hoping for a girl. According to Kenneth we didn't even need an ultrasound for the gender, because all radio operators only have girls and that's what he did for years in the recon unit he was with in the USMC Reserves. Kent has been saying girl since we told him, and I've been "feeling" girl since the beginning too but still, without hearing it "officially" I was trying hard not to be set on any one particular gender or another. It's hard when all your instincts are pushing so strongly in one direction though! It didn't take long before she got the shot she was looking for and said "Yep, it's a girl!" She is measuring on track, guesstimated weight is about 10 ounces at this point.

Now the baby registry, shower, nursery, and name planning begins! :) They couldn't get all the images they wanted to see at this scan, so I go back in 2 weeks for a repeat and hopefully Miss Baby Bunny will be more cooperative and not quite such a wiggle worm!

It was fun to take these "glitter reveal" pictures with Kent in our backyard - he's such a great sport and he likes taking pictures so we had fun with it. I was finding glitter everywhere all the way through the morning after the pictures though! :D
Email Post
Labels: family pregnancy