I found a site I like besides just BabyCenter for getting an idea of what is going on with each new week of pregnancy here! 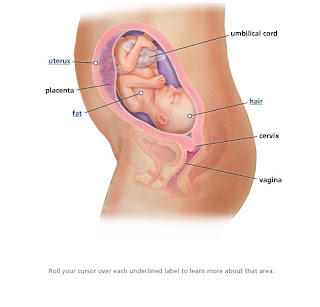 Baby is now pretty well built portion wise even though it still has little body fat and its skin is thin. The structures of the spine begin to form -- All 33 rings, 150 joints and 1000 ligaments. The tiny brain is growing rapidly, and the baby is starting to fill the space in your uterus. The uterus is now about the size of a soccer ball and mom looks pregnant.

Your baby's hands are now fully developed, although some of the nerve connections to the hands have a long way to go. Dexterity is improving. Your baby can make a fist and clasp objects placed in palm. Exploring the structures inside your uterus may have become baby's prime entertainment. Fascinated by the amount of tactile stimulation a fetus gives itself; it touches a hand to the face, one hand to the other hand, clasps its feet, touches its foot to its leg, its hand to its umbilical cord. Twins will explore each other and begin their bonding. See: Twins 3D sonagram movie.

Blood vessels of the lungs develop. Your baby's nostrils begin to open. The nerves around the mouth and lip area are showing more sensitivity now. Their swallowing reflexes are developing. Baby can hear sounds outside the womb and the brain cells are starting to mature also. Already it can learn and remember and can recognise its mother and fathers voice. The inner ear bones have hardened so hearing is more acute. Baby may hear your partner's voice more easily than yours, as baby is sensitive to a deeper pitch.

Babies born at 25 weeks of pregnancy have about a 50% chance of survival.

I watched the twin sonogram clip and it is adorable!! So amazing to watch babies interracting in-utero. I am thankful for reaching another week and love watching them tick by! :) Just two more weeks until we're in the 3rd trimester!

Counting down to Friday evening and getting to see my hubby, and all the activity that is coming the following week while we spend a few final days with him before he heads out and of course all the family get togethers and activity for Christmas!

All my packages and letters are mailed off now and I'm just waiting on 2 more gifts for Kenneth to arrive via UPS, once I get those wrapped up I'll be all set although I still need to get him a birthday card to go with his birthday gift (his birthday is Christmas Eve, lucky guy! :D )

I'm tired, having lots of congestion and a few uncomfortable braxton hicks every day, sometimes when I'm sitting and often when I'm up and moving around. Not all the time, but every now and then I get a really heavy and uncomfortable pressure down low too. Swelling hasn't been too bad the last couple days at least that I've noticed. So overall things are pretty "normal" which I think is great news!

We had Chinese last night, it just sounded good and had been a little while since I picked any up. The cashew chicken I ordered was sooo good! We ate it while we watched "Hachi: A Dog's Tale" and we both cried all throughout the ending of the movie!! It was so touching, so sad, but such a great movie too! Kent and I were laughing at each other and calling each other cry babies. :)

I'll take a new belly pic this evening when I get home - it's getting hard for me to tell but I imagine I'm about the same as last week still...
Email Post