Feeling pretty good today! I enjoyed sleeping in a little the last 2 days and catching a short nap both days as well. I needed it. I've been pretty tired very shortly after waking up lately, though other than being tired I can't complain! :)

Kenneth came to Atlanta for his chiro appointment on Friday and we grabbed lunch at Firehouse Subs afterwards and I was taking a half day and the plan was to go straight home afterwards, but when we came out to get in our cars I discovered I had a completely flat rear tire from running over something. So Kenneth had to put the spare on and we took it to Wal Mart to get it repaired. Eventually we made it home, though not much earlier than if I'd stayed and worked a full day... sigh... oh well! :) At least we got to spend the afternoon together!

Yesterday we had beautiful weather, and Kenneth went to Atlanta for his second chiro appointment (he's been going Fridays/Saturdays since that's what works best with his schedule) after I fixed biscuits and gravy for the boys. Then Kent and I had a quiet morning at home, and I got about an hour and a half nap. As soon as Kenneth got home, we hopped in the car and headed to Carrollton to visit Maggie at her apartment at school! We've never all gone up together before, and it was really nice to see her and meet her roommates and see where she's living. The apartment was really nice! We got a tour of her office where she works on the newspaper as well. It was nice to hang out and visit!

We got home mid afternoon and took it pretty easy the rest of the afternoon. Kenneth as a test first thing Monday AM so he got some reading/studying done too. His back has been really sore, so I've tried to "ban him to the couch" as much as possible this weekend. We got him a new PS3 game on Friday when we were at Wal Mart in hopes of helping him pass some time while taking it easy (he'd much rather be under his truck taking it apart and putting it back together, but it really tears his back up!)

Today its been rainy and icky all day, but I met with my very dear friend Robin for lunch. She's a fellow Georgia surrogate who I've known for years now... seems like forever ago when we first met! She's seen me through my first surrogacy and then she carried GS twins, then pregnant with her own and she went through a very painful loss, then I got pregnant with Miss S and now she's expecting her own baby girl Daisy! Lots of pregnancy between the two of us over the years! :)

This is the first time we've been pregnant at the same time so we of course had to get a belly picture of the girls "chatting"! :) 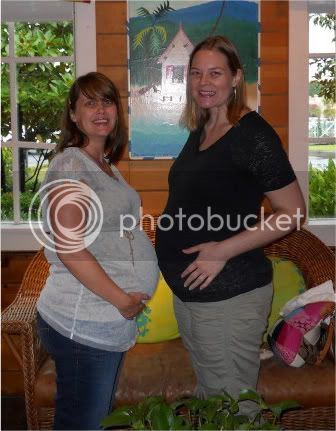 Wrapping up the weekend taking it easy again, sitting on the couch and just enjoying my boy's company while Kenneth plays his game and tries to rest his back... feeling content and at peace and just happy! It's been a very good weekend. :)