If you follow the news / weather and / or live in and around Georgia I'm sure you heard about our "Snow Jam 2014" that occurred last week.

It was ridiculous. Our entire city shut down over about 3-inches of snow. We are just NOT prepared for that kind of weather around here as it happens very, very rarely!

For me - this meant a very hell-ish and long commute home. I remembered the snow we'd had a couple years prior, and remembered being holed up at home for a couple days while it melted off - but I hadn't had too difficult of a time getting home from work the day that happened. Although, now I can't remember if it snowed in the afternoon, or overnight so that we didn't go to work in the morning... in any event, the snow started coming down mid-day this time which meant a disaster for anyone who subsequently tried to get on the roads and go ANYWHERE.

At 1:00pm they closed Emory University down and I headed outside to the circle to catch a shuttle ride back to the parking deck. About 10 minutes went by and 2 or 3 shuttles had come by, but I couldn't get on them because there were SO many people trying to catch a ride. After standing in the freezing cold, with snow accumulating on my head and shoulders, I gave up waiting and walked the 1 - 1.5 mile walk to the parking deck along with quite a few others. The roads were already very congested, and between congestion and the snow the shuttles were having a hard time getting through anyway. 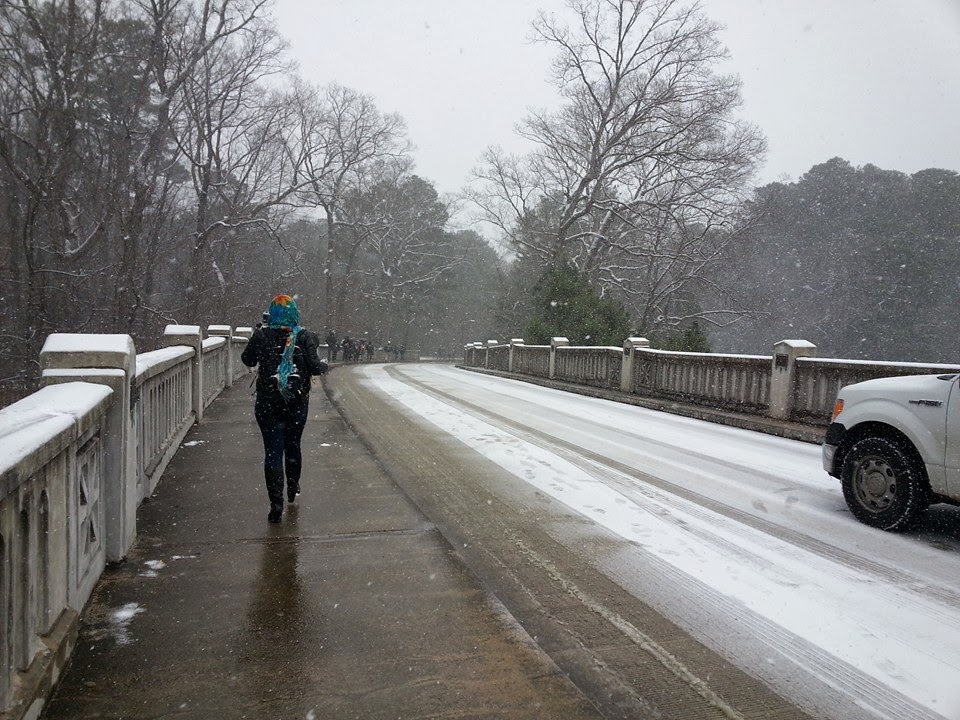 It took me about 20 minutes to get to my car. Then it took me about 2 hours to get from the parking deck to the freeway (this normally takes about 20 minutes). Then I sat on the freeway for what seemed like an absolute eternity. It ended up being about 6 hours I think on I-20 trying to get to my exit. I was so frustrated, tired, hungry, and exhausted but I refused to pull over. My husband kept encouraging me to just stop and get a hotel, and my good friend said she'd find a way to come get me and let me spend the night at their house - but I just knew if I pulled off, if I stopped my car on the side of the road or at a hotel, I wouldn't be able to get home for at least another 24 hours. I just wasn't ok with that. I wanted to get HOME. I wanted to sleep in my bed, I wanted to kiss my husband, hold my baby, and hug my son. I wanted to keep moving until moving wasn't an option any longer.

As it got darker, colder, and icier outside people began spinning out all around me. Semi-trucks became giant obstacles at odd angles across the lanes. The lines on the road disappeared and people were just winging it the best they could. I only saw craziness a couple times - mostly people pressing their feet all the way to the floor, spinning out like crazy, with only inches between their car and the one in front of them. I kept waiting for a giant smash to follow when I heard hard-core tire spinning... Lots of cars slipping and sliding a little on the ice, and lots of abandoned and parked vehicles all over the road, and shoulder of the road. The semi's were the worst - they littered the freeway and caused massive delays as people had to maneuver in and out of them. Anywhere there was any hill was also very bad. When I did finally get off the freeway, there was a decent sized hill that was causing massive congestion because of multiple stuck semi trucks and other vehicles across 4 lanes of traffic. So many vehicles had tried and failed to get up the hill that there was only one potential spot people could get through and everyone was trying to maneuver into that position. As I crawled slowly closer and closer to that spot, all I could think was please GOD don't let anyone in front of me get stuck in that one opening!! After I cleared that spot, I was able to get up the hill and to the gas station. I had been in the car for about 8 hours at that point and everything was sore, I was starving, and getting bleary eyed and a little bit delirious.

I got a sandwich and some coffee, filled my car up (my fuel light had been on for 2-3 hours at that point!) then got back in the car for the rest of the ride home.

It took about 2 more hours to get home from that point - there were a few pretty dicey spots on the main road I was on (one in particular where there were about 7-8 cars abandoned all over the road in a particularly curvy and icy spot which created a pretty nasty obstacle course). Once I got to the point where I could get off the main road and drive on the back roads it was pretty smooth sailing. The roads were completely empty. There was one hill about 1.5 miles from the house where a police officer was directing traffic and only allowing one car at a time to go (the hill crested over a bridge which was particularly icy).

I had been listening to Netflix on my phone for hours at that point. It was more distracting to me than the radio and when I rolled my window down to get instructions from the police officer he saw my phone and remarked on me watching TV in the car! I smiled and told him I promised I was just listening. :) Thank you "Sister Wives" for keeping me sane for many, many hours that evening!

I crept slowly the rest of the way home, passing an abandoned school bus which had obviously slid backwards into a ditch when trying to go up a hill and eventually made it to the bottom of the hill before my house. I pulled into my neighbors yard at the base of the hill (with her permission - thank you Tasha!!) and walked on shaky legs up the hill. I could have kissed the doormat. I was so HAPPY to be HOME! It was surreal to walk in the door, in the dark and quiet, after all of those hours of stress and anxiety.

That was on Tuesday afternoon / evening. The University was closed Wednesday and Thursday as well due to the snow.

We didn't get out and play in it too much - not with our little one who is not so fond of the chilly air - but we did go take a little walk and Kent sure got to enjoy the snow while it lasted! 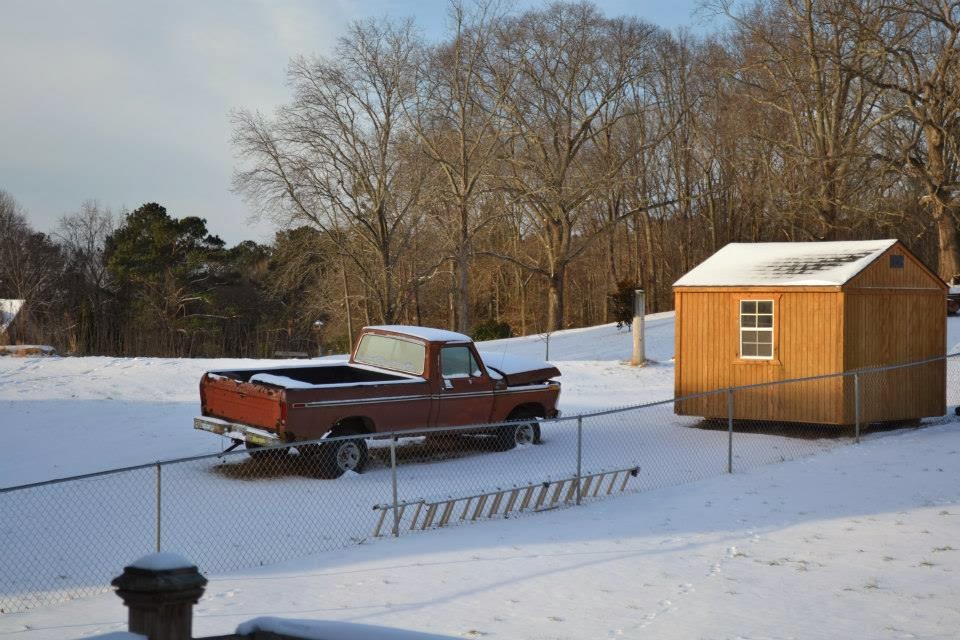 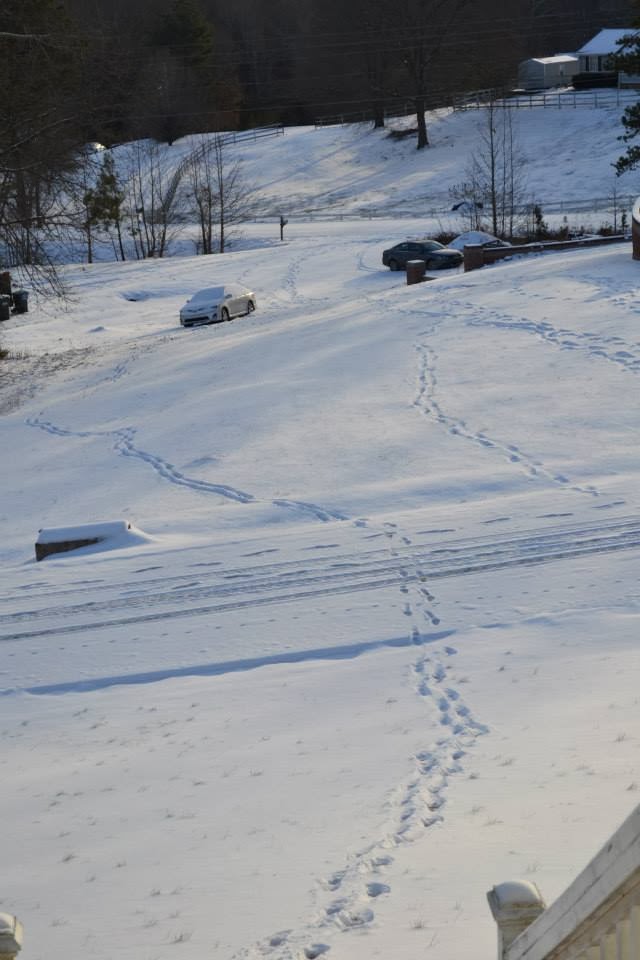 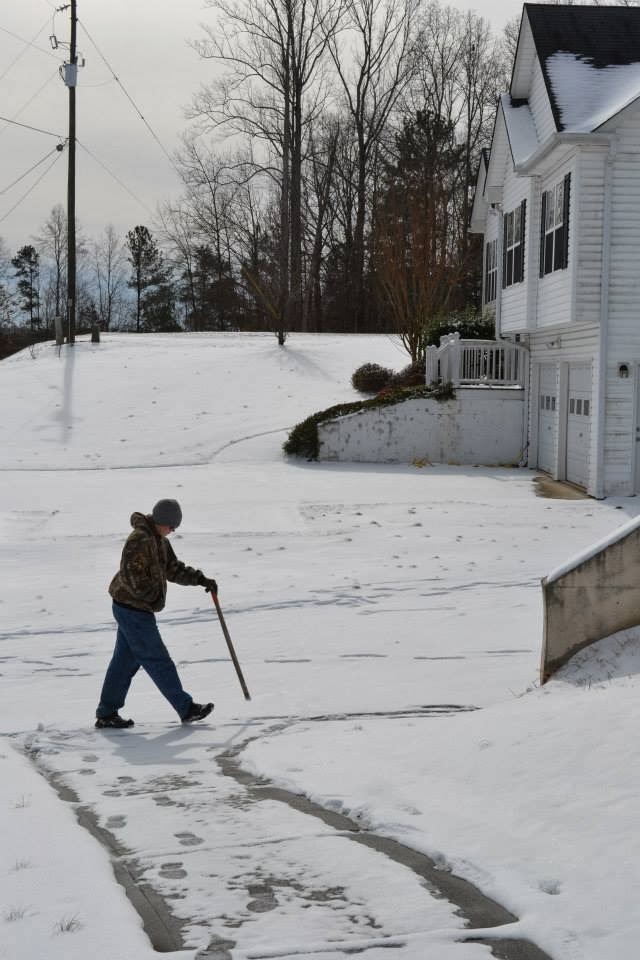 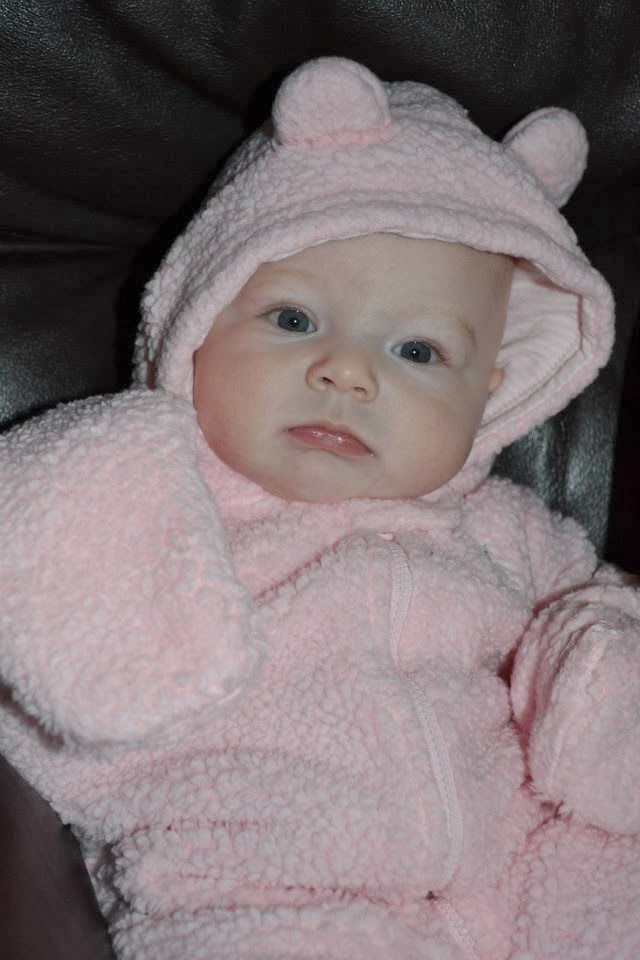 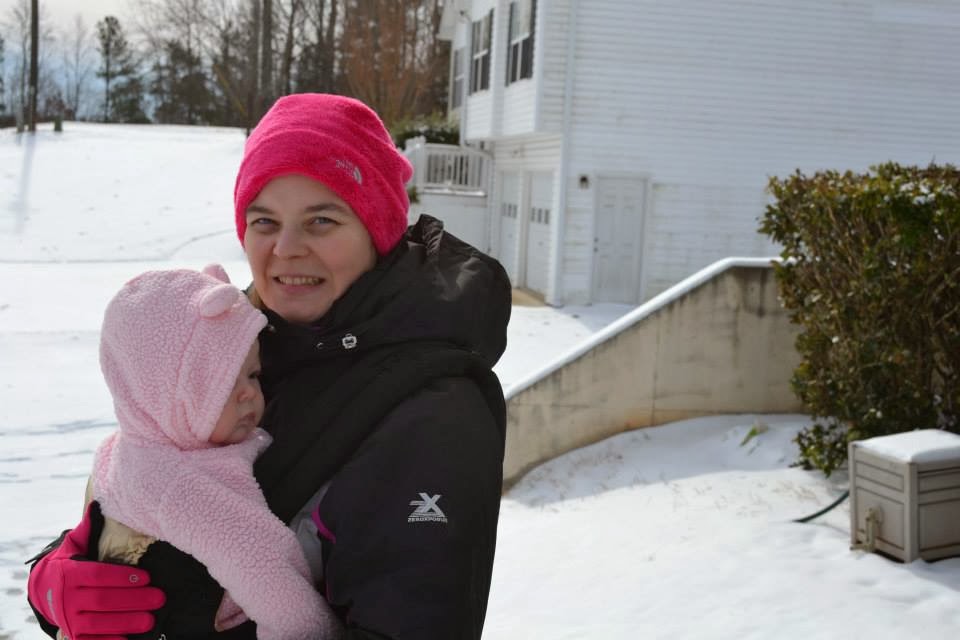