My husband was in the mood for steaks recently so I picked up a package of nice thick sirloins at Sam's Club and brought them home. I decided to find a new marinade recipe to try other than the one we've been using for a couple years now and love from AllRecipes.com as well.

I thought this was a GREAT marinade recipe, but I did notice a really big difference in the taste when I tasted a normal cut steak compared to a very thick cut steak (the ones we were using were two different thicknesses). I had the thick cut steak on my plate and the marinade was absolutely PERFECT with the meat; then I tried some of my husband's steak which was thinner and noticed the flavor was a lot more potent (that balsamic vinegar) and he said it took away from the flavor of the meat (while I was over there oohing and ahhing over mine)! So, this may be one that is better left in the marinade for a shorter period of time for normal or thin cuts. I left mine in the marinade for about 24 hours before cooking, so it had time to really permeate the meat.

Instead of traditional mashed or baked potatoes, we made Baked Potato Skins to serve with this, alongside a Caesar salad. YUMM!! What a terrific dinner! I was very full and satisfied when this meal was over.

I used the amount of marinade below for 2 large steaks, but it would have been enough for probably 1 or 2 more. You can always use what you need and freeze some for later use if you decide it's more than you need! :) 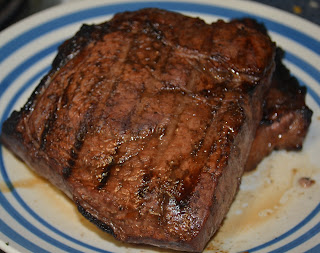 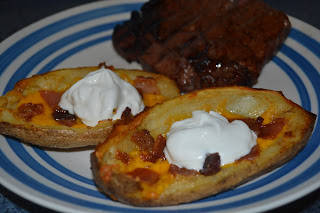 The Best Steak Marinade by SweetCravings on AllRecipes.com