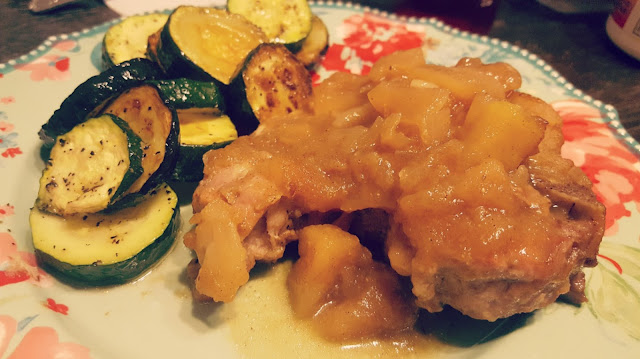 This was a very tasty pork chop dish we enjoyed the other night. I love the combination of apples with pork and have had a lot of apples to use up ever since we visited an Ellijay apple orchard not too long ago. I had made a pretty good sized batch of applesauce, and thought it would be nice to use some of that over pork chops and discovered the recipe below, which also incorporates additional fresh apple pieces and onion as well. It came together into a very delicious sauce which the thick chops were baked in. I loved the flavor and how juicy the pork stayed (even though, I admit it, I overcooked them!)

Even amidst the Tuesday night craziness that is getting home from work, getting Lindsey to and from ballet, and preparing for the Bachelor in Paradise finale, we managed (group effort) to pull off a beautiful, homemade meal. We served these pork chops alongside some simply roasted sliced zucchini and moved on to the Peachy Apple Crisp I'll be sharing in another day or so!