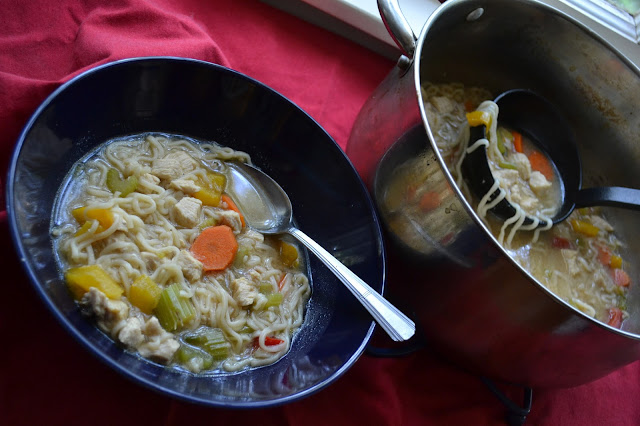 As part of the August Swanson campaign for the AllRecipes Allstars, I was sent 2 cartons of Swanson's delicious broth to use in any of their delicious recipes on AllRecipes and saved a LOT of them to try in the near future. I chose to make two of them right away - this yummy chicken noodle soup, and this mashed potato recipe which I'll be sharing soon.

I didn't have precooked chicken, so I chopped up a large chicken breast half and threw it in at the beginning of the recipe so it could simmer in the broth mixture and soak up all that delicious flavor. 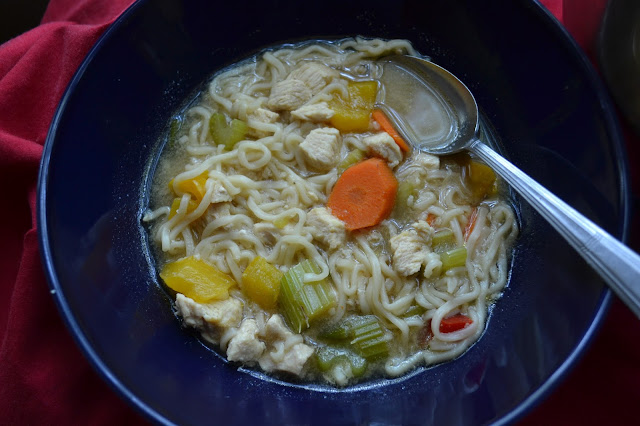 This soup was perfect. Easy to throw together and consisting of pantry staple ingredients for the most part. I had a bag of mixed diced bell peppers in the freezer, so I tossed a handful of those in, in place of the called for red bell pepper. The broth is simple and delicious, with hints of the garlic and soy sauce. I used a reduced sodium Swanson broth, so added in a small sprinkling of the chicken flavored packet that came out of the ramen noodles I used for a touch more flavor. Taste test at the end and adjust as necessary for your family's preferences!

I found mine needed to simmer a little more than the amount of time called for to get the celery and carrot to the tenderness I was looking for. You may want to add more broth at the end as well, depending on how much simmers off during cooking, and how much the noodles absorb (and how "soupy" you want it)!

My baby girl loved this recipe - the noodles and the broth the very most though she did eat a few pieces of the veggies and chicken too. She slurped up probably half a cup of the broth and kept asking for more soup. I think this one is definitely a keeper!