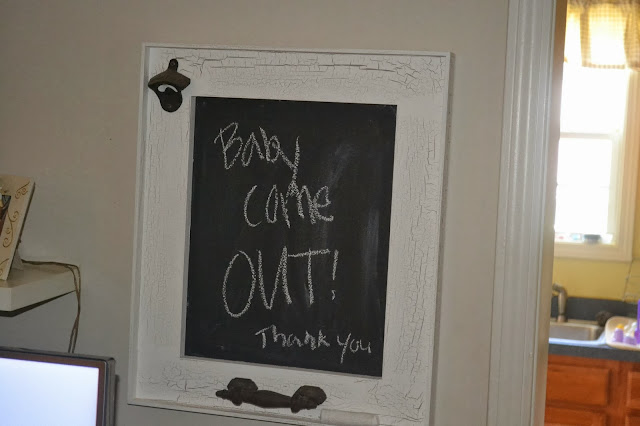 9-16-13 39w1d - Here it is Monday again! This afternoon at work I've been rocking on my exercise ball and contracting about every 5 minutes. Some are pretty intense, some just tight. My lower back is starting to feel it too. Probably just more "warm up" but my fingers are crossed. Right now it feels like baby is poking my cervix with sharp objects; let us hope that is my cervix opening under pressure!! I slept really poorly last night. I gave up around 4:30am and got up and did some chores - restocked the sodas, brought dish soap up from the basement, swapped the laundry out and was generally annoyed at my inability to sleep a little while longer. I tossed and turned a lot last night. I was definitely ready to get up and get through another day by the time my alarm went off at 5:45am. I'd already showered the night before thanks to a run out into the front yard to chase off a neighbors dog who came in our yard to bark at our dogs through the fence, and when I did so I ran through some disgustingly sticky cobwebs (think cobwebs imbued with rubber cement, or something along those very sticky lines!!) It grossed me out, so I showered after finishing up the dishes to get the creepy crawly sensations off.

I was beginning to think my rocking was the only thing causing the contractions but now as I slow down the rocking they keep coming - here's to wishful thinking...

*** Delivery Update ***
I had started my normal weekly post above as you can see, and indeed labor was under way that afternoon! I decided to go ahead and go home and see if I could get contractions to pick up, I paced the halls and walked up and down the street outside our home. They kept coming, but were pretty spaced out and so eventually I gave up and we went to bed. Contractions woke me up intermittently throughout the night, but never got more intense and close together like I was watching for. Nonetheless, by the time the alarm went off in the morning I was feeling pretty crappy and exhausted, and so was Kenneth, and felt like this probably was early labor - it was just progressing really, really slowly. Kenneth and I made the decision to pack up and go to the hospital to get checked, and if I had made progress maybe they would take pity on me and let me stay - even if  I wasn't in full on active labor yet. Between the long early labor, baby's 2 vessel cord, and the hour plus drive I was really hoping we'd get admitted and get to meet baby girl that day!

We showed up and were taken back to triage - I think we got there around 10:30 and they decided to monitor me for an hour to see if I had any cervical changes. I dilated almost a centimeter during that hour so they decided they would go ahead and admit me (I threw my fists in the air and said "YAY" to that) and start some pitocin.

They got us moved to a L&D room and the nurse allowed us to walk the halls for awhile since we were waiting for pitocin to be ready. Eventually she had me come back to the room and get hooked up for monitoring and I think it was around 4pm or so maybe when the pitocin was finally hung and started. Contractions had been slow but steady up to that point - with about 3-4 every 10 minutes, in the rather uncomfortable arena but not horribly painful yet. With the pitocin on board they slowly started getting closer together and increasing in intensity. At 6pm there was a shift change and at around 6:15pm the new doctor on duty came in to touch base. He asked when I wanted to have the baby - and I remember looking at the clock and saying 8pm sounds good! He said, ok I'll be here! It was sometime around that point that I asked for some IV pain meds - contractions were picking up and getting closer together and much more painful. I remember the nurse checking me and I was only at a 6 at that point. I was feeling pretty discouraged by that update. The pain meds really didn't do much more than make me feel woozy. The next thing I remember is a hard contraction, I was rolled on my right side, hugging the rail and trying to get through and a big POP and what almost felt like a shock or a jolt and my water broke everywhere. I hit the call button for the nurse and asked Kenneth to check to make sure there was no blood, which thankfully there wasn't. I'm not sure what time it was at that point - somewhere between 6:30 - 7:00pm probably. It wasn't much longer before I was in real agony - after my water broke things got SERIOUS and fast. I felt like my insides were ripping apart - I'm sure my other labors were probably similar, but this one felt way more painful. I'm not sure if it was because of the pitocin, or what the deal was but I was in a lot of pain and was completely exhausted and so sure I had hours and hours left of this since at my last cervical check I was only at a 6. Probably around 7:30 or so I gave in and begged for an epidural. It felt like it took them an ETERNITY to get it called in and finally come to the room and read through all the risks and get my final ok. I was so over it and so ready to not be in so much pain anymore. I wish I'd had them do a cervical check before final consent. When they sat me up to get my back ready a huge amount of water came gushing out, and gushing and gushing... it was everywhere (the nurse later commented on it several times - referring to my "copious" amount of water). My legs were shaking with each contraction, and I knew baby was about to come out. Then as the needle is going in my back, baby is crowning as I'm sitting there on the bed... In some delirious part of my brain I found it rather amusing honestly - but mostly it was ridiculous. Baby was coming out, the contractions were just racking my body and making me shake and there was a huge needle in my back and I wasn't allowed to move... Seriously... Thankfully the anesthesiologist finished up, I was allowed to lay back down, the OB arrived, I got into position and sure enough her head was right there. The OB was awesome - the most laid back one about pushing I've had yet - he said when you're ready just give a gentle push. There was no "PUSHPUSHPUSH!!" The epidural meds hadn't even kicked in yet and I felt every single one of those contractions moving her down the birth canal - except for the very LAST push when she came out. That was the only thing I didn't fully feel. It didn't take much pushing, my body had done almost all the work while I was sitting on the table getting the epidural! I had been bearing down during those contractions - the nurse was telling me not to, but seriously there is nothing you can do at that point, I was just along for the ride!!

So at 7:59pm a beautiful little 7lb 14oz, 20 inch long bundle emerged from my body, and completed our family. She is absolutely perfect and beautiful and we are all completely in love. Her apgars were 9 and she passed all of her tests with flying colors. The pediatrician deemed her perfect when she came to check on her before we were discharged on Thursday (I delivered on Tuesday evening). It has been a whirlwind couple weeks and things are slowly starting to settle down now. We've been in and out of the pediatrician's and to the ER as well - Lindsey has reflux and it was causing her a lot of pain and discomfort. She also had tongue tie (just like her big brother), so we had to get that clipped when she was 1 week old. It has helped a lot with nursing - although we are still supplementing with some formula as I am not producing quite enough to meet her needs. She is gaining well - she was up to 8lbs 1oz when we saw her pediatrician on Monday. We were went over to imaging to get x-rays of her belly to make sure she didn't have a blockage since she hasn't been having any bowel movements on her own since she came home from the hospital. We'd been using suppositories every 3 days. Thankfully everything was clear on the x-rays, and her pediatrician prescribed liquid Zantac to help with the reflux. She's been on that for 2 days now and it really seems to be helping tremendously. On Monday I told her pediatrician I felt like we were parenting Dr. Jekyl and Mr. Hyde. She'd be perfectly content, normal, healthy, happy baby most of the time and then all of a sudden an angry, screaming, Mr. Hyde would appear for 6+ hours at a time with fits of restful sleep in between. She'd want to nurse or suck on something constantly and was so upset and angry (hitting, biting, scratching) and you could just tell she was in a lot of pain. It was breaking my heart to see her like that so I am SO relieved that the meds are making such a difference for her!

We've also been experimenting with her sleeping location. She doesn't like the bassinet we have, and wants to sleep in someone's arm or next to us on the bed. Obviously just being next to us in the bed isn't a safe option, so we got a "Snuggle Nest" that provides protection for her but allows her to be in the bed and that is working pretty well. At the pediatrician's suggestion we also got a Fisher Price Rock N Play Sleeper - it keeps them in more of an upright position which can help with reflux. We haven't tried it out yet - but will give it a shot tonight. It would be nice to have our bed back. We have a Queen and it feels pretty small with a mini-bassinet in between us! We're working on getting her comfortable with her bouncer and swing. She'll stay in them for about 10 minutes before getting fussy and wanting out. She's also not a big fan of tummy time yet. We have a very cute baby gym, and hopefully eventually she'll decide it's kind of cool and interesting and not get so irritated with tummy time. She certainly has her own little personality, likes, and dislikes already and I am loving getting to know her and share these precious days with her.

Seeing her with her daddy absolutely melts my heart... Kenneth absolutely adores her and it it so precious watching them together. She loves to just stare up at his face and watch him. It is beautiful and I could just watch the two of them all day. :) Kenneth went back to work after 1 week but since he telecommutes we still get to "see" him during the day. Lindsey and I spend most of the day out in the living room - eating, sleeping, watching TV and I try to fit in a couple chores, wash some bottles, and make some food occasionally in between.

We've gone out for errands a few times - it is so hard to plan around their schedule but I'm figuring it out slowly!

The days are passing super quickly and I am trying to soak each of them up as much as I can... 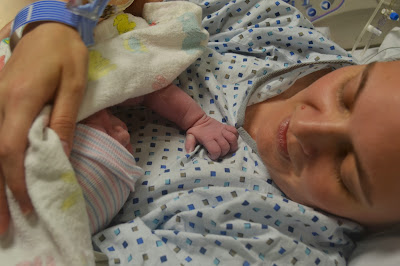 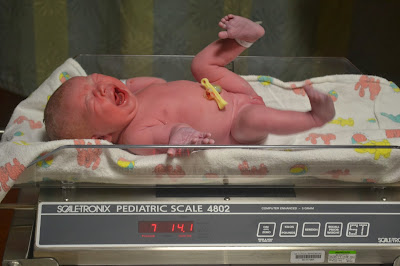 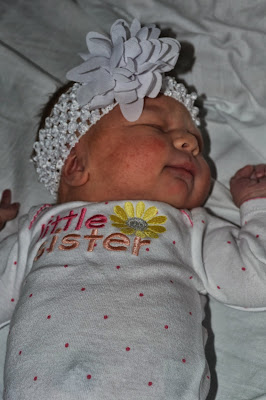 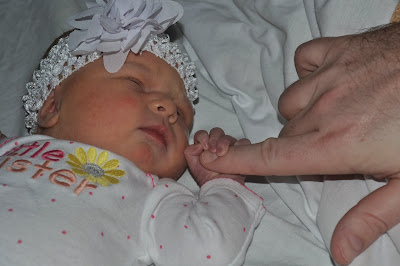 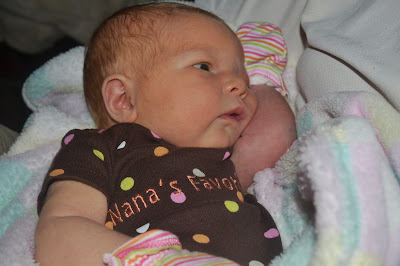 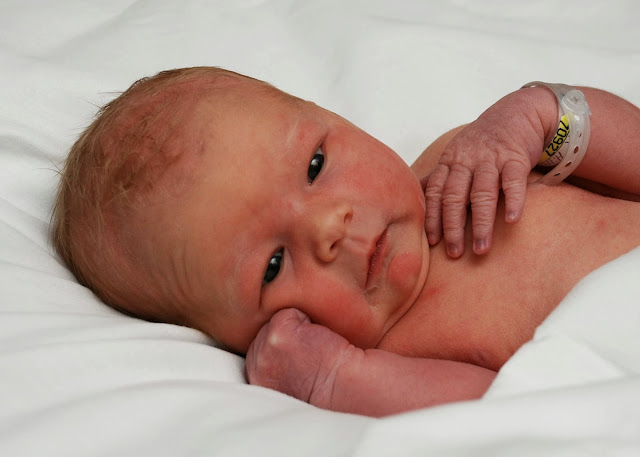 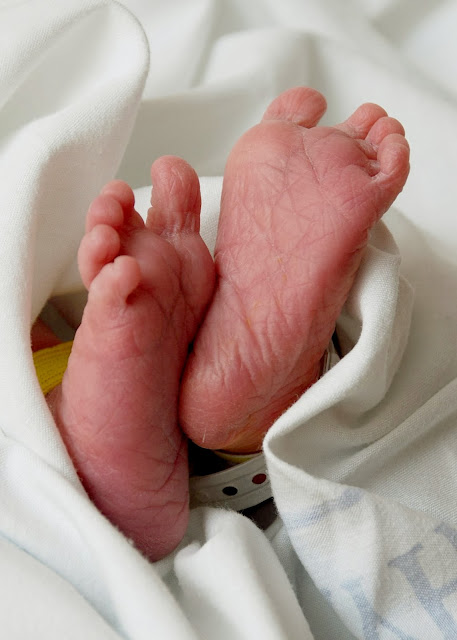 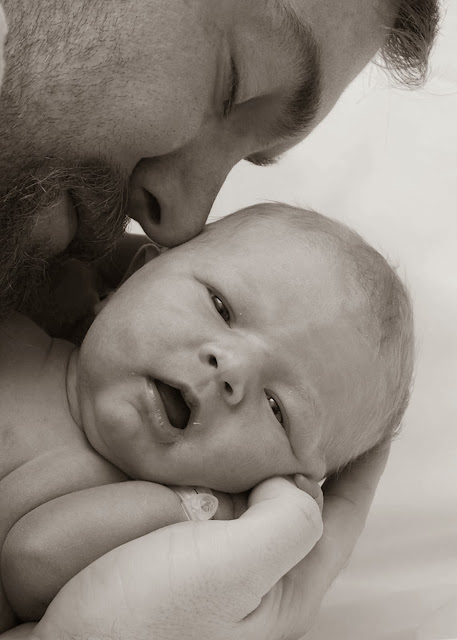 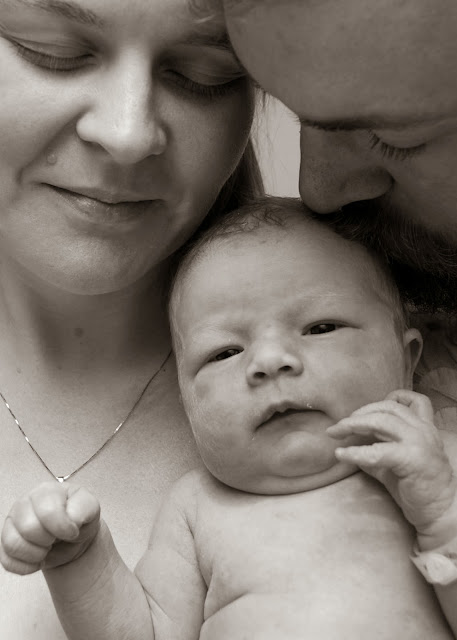