Another week has arrived!! I can't keep up! :) The days are flying by so fast now. We had a WONDERFUL weekend with Kenneth home, he got in very late on the 23rd (we got home at midnight) and we spent the 24th and 25th enjoying good food, lots of down time and catching up on a few errands and some shopping. On Saturday we met with Kenneth's grandmother for dinner at Ted's Montana Grill and I had a HUGE bison burger topped with lots of yummy things including a fried egg which I realize sounds VERY weird and gross to many, but it brings back very fond memories of the burgers we used to get at Ali Baba's in Dakar, Senegal when we were teenagers in High School. They were the BEST burgers! The rolls were a sweet bread and the tops of the buns were hallowed out and stuffed with tiny french fries, then the burger with lettuce and tomato and a fried egg and of course ketchup... drool...

Overall I'm still feeling pretty good - having a lot of trouble sleeping lately which stinks. I slept GREAT while Kenneth was home for what felt like the first time in forever, but am right back to waking up for an hour plus most nights for no reason now. This morning I woke up at I think 2:30 and laid in bed for almost 3 hours before I gave up, got up and had an early breakfast and played on the computer for a little while before getting ready for work. I am wiped out already! The feet and ankle swelling is about the same on the days I work - the days I was home on Thanksgiving break I didn't have much swelling at all though which was nice.

The babies are being pretty active lately - I've been feeling lots of thumps and bumps down low - like they're tap dancing on my cervix! I am going to have to do some headstands or something so they leave it alone and go play somewhere else!! No bothering the cervix yet baby girls!! That comes much, much later (like in 15 more weeks!!) :D

We have the PBO hearing this Friday! I can't believe it's already time for that and think the attorney's office is pretty awesome for getting it moved through so quickly - I guess with twins you don't want to wait any longer than absolutely necessary! 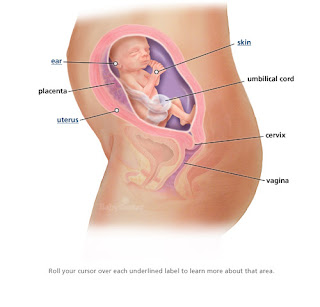 So, according to BabyCenter this week:
How Jenn and Chad's babies are growing:
Turn on the radio and sway to the music. With her sense of movement well developed by now, your baby can feel you dance. And now that she's more than 11 inches long and weighs just over a pound (about as much as a large mango), you may be able to see her squirm underneath your clothes. Blood vessels in her lungs are developing to prepare for breathing, and the sounds that your baby's increasingly keen ears pick up are preparing her for entry into the outside world. Loud noises that become familiar now — such as your dog barking or the roar of the vacuum cleaner — probably won't faze her when she hears them outside the womb.
Our foster puppy is going to be heading out on transport this weekend, then Saturday will be busy with Kent's SAT test and my company party in the evening and hopefully Sunday will be taking it easy. Kenneth is considering making the drive on Friday PM/Saturday AM just for the party and would then leave on Sunday. I so want him to be there but know that's a LOT of driving for just an evening event! We'll see how his week goes. We're still waiting to hear a definitive timeline for his deployment and whether or not we'll have him home for Christmas - fingers are staying crossed! :)
Email Post