After my internet being out at home for nearly two days it finally came on again last night so here they are! Me and the girls at 21 weeks on Tuesday November 15th! 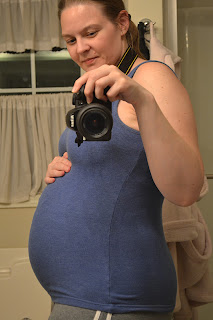 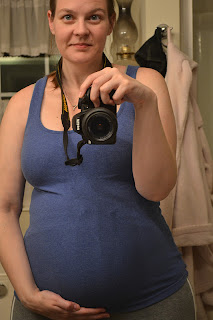 I'm up in the middle of the night this morning with my brain running a million miles an hour and hungry for a bowl of cereal. I have been sleeping fairly well most nights so this is annoying to say the least, but at least it is Friday. I've had a long "to-do" list all week that I've been chipping away at a little bit each day. Normally I like to save errands for the weekends, but there was way too much to do this week and a lot of it was to get ready for this weekend and Kent's party on Saturday! He has his first sleepover so he gets to clean his bedroom and bathroom really good this evening which I'm sure he'll be thrilled about!
I felt like I had the worst day on Wednesday. I'd dropped my car off on Monday morning for repair work to the bumper after being rear ended a month ago, and got the call it was ready for pick up Wednesday. On the way home it felt like it was dying all the way - like it almost stalled out constantly and the engine light was flickering off and on. I was stressing out the whole way home and trying to figure out what to do. I couldn't even begin to guess how maybe something the body shop did could have caused that and figured I'd have to take it to my repair shop the next morning. I was tired and cranky by the time I got home and just irritable most of the evening (especially after I realized I'd left my garage door opener in the rental car and would have to drive the 30 minutes in the wrong direction away from my house AGAIN the next day to pick it back up) and feeling sorry for myself for having to deal with everything for Kent's party, the house and now car issues by myself. I vented to Kenneth a little when he called - I know he feels bad when things happen and he's not here to help but sometimes you just need someone to lean on. Then yesterday the car worked FINE. Acted completely normal, no weird noises, smells, ran fine and the internet was finally back on when I got home yesterday afternoon and I was able to run a few errands on the way home which  made my mental check list more manageable. I am glad to have made it through to the weekend (well almost!) and feel mostly caught up on all the to-do's and ready for Kent's party.
I've been working on catching up my photo albums and printing pictures from the past 5 plus years and that has been a nice project to come home to in the evenings. I finished sorting all the ones I'd had printed on Wednesday evening (from 2006-2007) and got them all put away and labeled last night into the albums I'd bought years ago! I have already ordered photobooks for 2008-2009. Now I'm getting the 2010 pictures uploaded to Snapfish and in no time I'll be caught up! I LOVE my pictures and photo memories so it feels really great to finally have this project almost done after all these years of continually putting it off! Especially after almost loosing 2 years of pictures when our hard drive crashed on one of the laptops (but thankfully I'd already uploaded the pictures I wanted to print to Snapfish so at least most of them were safe) I hopefully have realized it's not a great idea to put it off year after year and will maybe try to keep up with it at least on a yearly basis now! I really do love the photobooks - they are such a great invention! It's so fun to arrange the pictures however you want them and be able to put a bunch on one page together especially for the birthday parties and field days and events like those where I generally take a bazillion photos anyway! :) I'm looking forward to finally seeing the finished product whenever they get here!
Ok, off to eat my bowl of cereal and see whether or not I can catch another hour or two of sleep before the alarm goes off!
Email Post