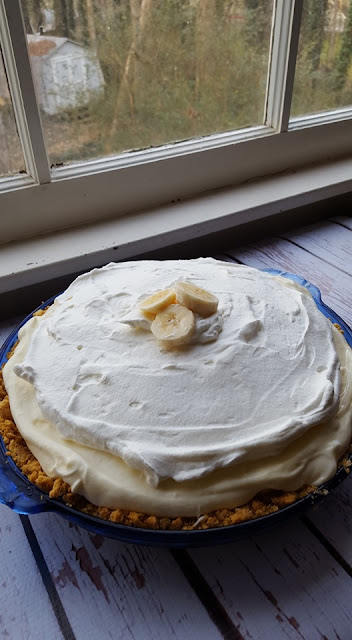 Last year Camilla at Culinary Adventures with Camilla rallied some blogging friends to help her celebrate her 15th wedding anniversary. She was only looking for fifteen cheesecake recipes. But we posted waaaaaay more than #FifteenCheesecakes. Last year I made a Classic Cheesecake with Strawberry Sauce!

It was such a hit and we all had so much fun that she decided to see if she could get enthusiasm for another round of cheesecakes. Yep. This is an encore performance by some of her favorite foodie bloggers. 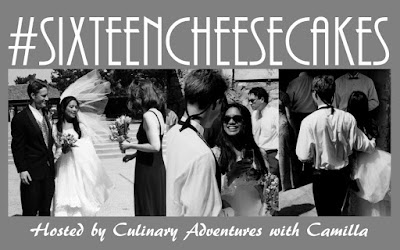 This Banana Cream Cheesecake is really fun and delicious - and I am going to be making it again, very soon, and with a few changes to see how it comes out. When I made this, I used a large package of banana cream pudding, prepped, and used half of that because I didn't have a small box, but I think maybe my "half" was more than a 3.4 ounce package would have been. We liked having more filling so I will probably do it that way again next time. Also, we thought it could have used a second package of cream cheese, but since I didn't make it that way this time I am leaving the instructions as I made it. We also are going to try to booze it up a little next time - and maybe soak the banana slices in some Banana Liquer, and throw in a TBS or so to the whipped cream and / or filling mixture. I'm pretty excited to give it a try again with this changes! I have a couple other desserts I'm working on for Easter weekend, so once the sugar settles from those kitchen adventures I'll have to give this one another go. 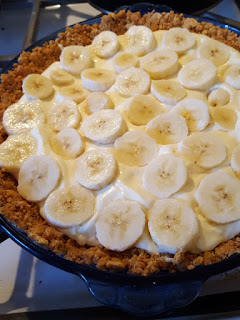 I used a pie plate for this cheesecake - so I guess that makes it a "pake". Whatever you want to call it - it was creamy, fluffy, and delicious!

Happy anniversary Cam!! Thanks for letting us join you to celebrate today. :)