I finally tried this recipe... I have had this saved in my allrecipes.com recipe box for about a year and a half now! I usually try pretty hard to eat very light at breakfast and avoid sweets in general. However with Kenneth home my generally good eating habits have a tendency to take a brief hiatus and we try to make up for his months eating at a mediocre chow hall by going overboard with the homemade goodies!!

For the original recipe (which I followed pretty much exactly) visit Pioneer Woman's website here. I did end up using a little more flour than called for, mine was still really wet in the bowl and wasn't forming a ball. I probably added about 1/3 cup, just enough so that it almost made a ball shape especially when I had the Kitchen Aid turned up. I used a spatula to scrape it into the oiled bowl when it was time to put it in the refrigerator.

This was a pretty labor intensive and time intensive recipe but totally worth it for a special treat. I fixed the dough last night and let it rest in the refrigerator overnight. At about 6:00am I got up and rolled the cold dough out on a lightly floured surface. I cut the doughnuts (using a plastic cup and the cap off a Zyrtec bottle!! I think I need to get some round cutters!!) then I set them on two lined baking sheets and put them on top of an oven I'd preheated to 350 then turned off for a warm place. I left them covered with towels and was hoping they'd be risen after 2 hours but they were just STARTING to rise at that point, so I turned the oven back on to 350 to get the surface warm again and two hours after that they were puffy and ready to go!

I put about 3 1/2 cups of shortening in a large pot and heated it to around 350 degrees per the instructions (I got to use my candy thermometer for the first time!) I was shocked how FAST these cooked! It was only about 20 seconds total per donut, they bubbled and turned brown really quickly so I only did 1 donut at a time. While I was frying them my son fixed the glaze and coated each side then put them on a cooling rack placed over a cookie sheet for the glaze to drip onto.

These are soooo good. Very decadent treat, but if you're going to eat doughnuts, this is the way to go!! 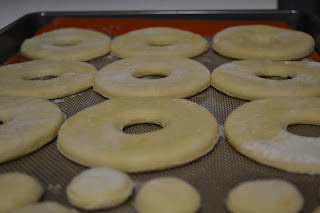 Cut the dough into doughnuts and doughnut holes. 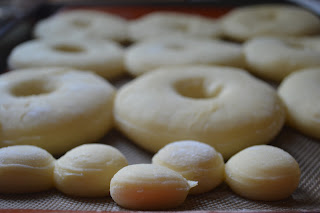 After the dough has risen for about 4 hours. 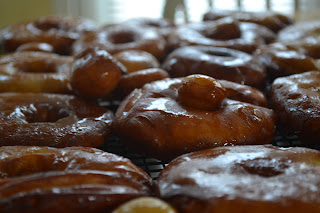