The Day My Earth Stood Still

This is my son: 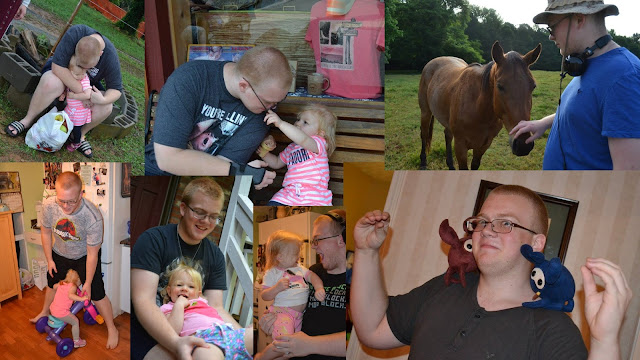 His name is Kent - he is 16 years old (17 next month!) and about the best kid you could ask for. Sure - he's a smelly teenage boy who doesn't like to clean his room, or scrub his bathtub, or empty his trash. But he's creative, very sweet, sensitive, kind, loving, will stand up for his friends and family, is polite, respectful, smart, a great conversationalist, has a fantastic sense of (warped) humor, is a nerd, is an amazing big brother, and honestly is one of my best friends.

Why am I telling you about my boy? Because on 10/9 my earth stood still. I got a phone call at 10:00am that will forever change my life. The nurse from Parkview High School was on the line. Kent had complained of a migraine and passed out and fell face forward during PT with his JROTC group. He was conscious, but very lethargic, had vomited and was out of it and not speaking coherently. The ambulance was on its way to take him to the hospital. I got the name of the hospital said thank you, closed a few things on my computer, told my sister (who is working here in the office) that something happened to Kent and I had to go. Then I was walk / jogging to my car. I think it was a very nice day outside. I had gotten to my car and was about to pull out on the main street when one of Kent's JROTC coaches called and gave me a different hospital (which happens to be across the street from where I work). I parked and ran to their ER. I waited there a few minutes and got another call from the EMT that they were sending him to yet another hospital, Atlanta Medical Center. I booked it back to my car, got the GPS queued up and headed out. It wasn't too far away.

Everything was a blur. I got there, explained who I was and got taken back to a small family waiting room. Two doctors came, asking me questions about Kent's personal medical history, family history of migraines, anything relevant. I couldn't tell them anything helpful. He was exhibiting stroke like symptoms but the CT was clear and they thought maybe he'd had a rare complex migraine. They had an MRI ordered. I was able to go back and see him. I held his hand, I talked to him. He was very in and out, and disoriented. I think he may have said one or two words to me, but can't remember what they were. Finally they were going to take him for his MRI. It was around 1:30 at that time. My phone battery was dead and I hadn't eaten anything all day. I thought I'd run to my car for a charger, and grab a quick sandwich and come back. I got back about 20 minutes later to find out they needed a consent from me to do the MRI so he was just waiting up there. I finally got up, gave consent and went back downstairs. Kent's JROTC Major had arrived and kept me company in the room while we waited for Kent to come back down from imaging... Not long after that my world that already seemed topsy turvy crashed into the ground and crumbled. The doctor came in. He's had a stroke. An artery in his brain is blocking blood flow to a large area. I was handed a phone with the interventionalists NP as she explained they wanted to go in through his groin with a catheter to access the blockage and try to clear it. There was a 10% chance that this could cause a fatal brain bleed. Did I understand what I was being told... I couldn't breathe, but I understood... I wished I would just pass out and not have to hear anything else... not have to sit there and look into the dazed eyes of my beautiful boy who was fighting for his life right in front of my eyes, who's brain was dying right in front of my eyes.

The interventionalist was on his way in. It was sometime around 3:30 - 4:00pm I think when we were wheeled back to the cath lab. The interventionalist (I can't remember his name now) briefly shook my hand before rushing back through the double doors... to put a catheter into my son's brain. Where the blood flow was blocked. How did this HAPPEN??

Major and I waited in the waiting room. He put on Jerry Springer and made sure I drank water. I am so grateful for his presence. He told me stories about Kent and made me laugh and smile. I cried. I cried some more. I tried to breathe. I texted immediate family. Kent's dad Kenneth was on his way back into Atlanta already and was headed for the hospital as quickly as he could get there. I think it was around 5:30pm or so, maybe a little later, when the interventionalist came back out. I'm so sorry, I'm so sorry, I'm so sorry.... that's all I could hear from him. I thought my boy was laying there dying on a table. What he was telling us was that he'd accessed the blockage but couldn't remove all of the clot. He was able to clean up some of it and restore some of the restricted blood flow, but couldn't remove the clot. He tried suction and a net to grab it, but every time he pulled some of it away, it filled back in. He said he was getting plaque as well, which meant the clot had been there, sitting in his brain like an ugly time bomb, for some time. Months perhaps.

My friend from work arrived around the time when Kent was being taken from the Cath Lab to CT for another scan before being transported to Egleston. We touched his hand and shoulder as he passed by on a bed. We were all in our cars when they called to say wait, there is more discussion about where he should be sent. To Emory's Stroke Center, or the Egleston's PICU? He's a pediatric patient, but almost 17 and at 6' 1" a large pediatric patient - where was the right place for him? We waited a couple hours. Then a helicopter from CHOA's Egleston hospital arrived to life flight him... His first helicopter ride... We loaded up in our cars and headed over to wait again for them to get him settled so we could get into the room and be with him... 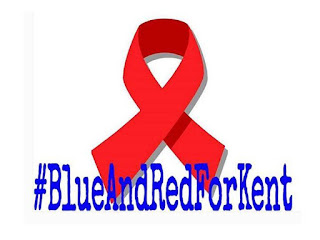 Saturday is a blur. Kent's vitals were a little all over the place, his temperature was fluctuating. Sunday AM it seemed like things were sort of stable. I went across the street to my office mid-afternoon to print some pictures of Kent to put up in his PICU room and breathe some real air for a minute. I was on my way back across the street when Kenneth called. Get back here now. I couldn't breathe. Again. I ran, my body didn't have anything left to give, but I ran. As I came down the hallway out of breath and tears in my eyes again I saw all the people in the hallway, lights flashing... my boy... his pupils had fixated. The pressure was too high in his brain. Emergent surgery. They had him intubated within minutes and hyper oxygenated to help relieve the immediate pressure. He was loaded up and they lined the halls with staff to hold doors, clear a path, call the elevator. We walked behind. I sobbed. I was terrified.

We got down to the surgical suite and they took him back to prep him. Around 6:30pm that evening they were done. It took about an hour. There was a big group of us waiting. Kenneth, me, Kylie, Dale & Kelly, Dave & Sherry, Ken & Donna, April... we waited. We tried to eat, we waited. The neurosurgeon came out and said the surgery went well. About a hand sized piece of Kent's skull was removed on the left side to allow for the swelling and to prevent damage to the healthy tissue remaining.

I won't keep going into detail - it's hard to recall it all but the next 3 days Kent was intubated and fairly heavily sedated. On Wednesday they started waking him up and extubated him on Thursday. His vitals were still in flux, his temp in flux. It was a rough and scary week. On 10/20 they took the drain out of his head and the next day he was cleared to be transported to inpatient rehab. We've been here ever since.

Some pictures from rehab (Kent loves "The Zone" which always has some activities / games / movies going on for the kids): 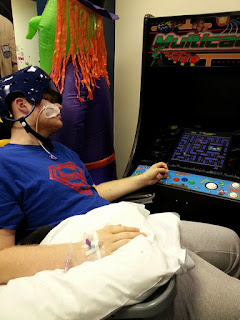 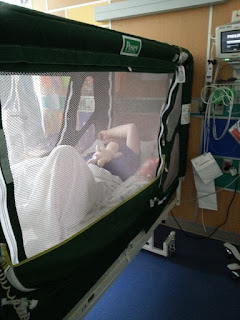 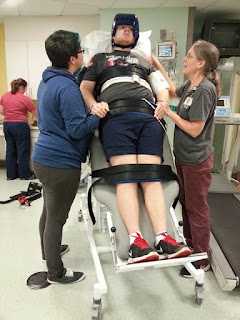 Kent is making enormous progress, but he has a long, long way to go. After not hearing him talk for 2 weeks, in the past 3 days or so he's made incredible strides with his speech. Talking again in full sentences, correctly identifying images, answering a ton of questions, expressing feelings and needs. He is fully aware of what happened and seems to remember everything - more than I'd hoped about his PICU stay unfortunately. I just started back to work yesterday and it's really, really hard to not be there with him all day, but I'm trying to get back into my routine as well, and let him focus on working hard with his therapists who are helping him get stronger each and every day. Kent has no voluntary movement on his right side and will have intensive OT and PT to regain strength and control on that side so he can sit, stand, and walk again. He will continue working hard with speech to regain the ability to read and write, and also to eat. These are major challenges and obstacles but we are hopeful that with his age and health he has the best chance possible for a good recovery. We've been told that a 1-year recovery is expected.

He will be inpatient for rehab for about another month and then we'll talk about transitioning home, and have a better idea then what that will mean - we will most likely need to retrofit the house / bathroom, access to his room, etc. He may need daily assistance for basic self-care, may need a wheelchair. It's hard to know right now, but time will tell. In the mean time he's in the best place possible to help him get back as much control and strength as possible.

Thank you so very, very much to everyone who has been sending cards, letters, support, love, positive thoughts, prayers, and of course to everyone who has already sent gifts, financial support, etc. This is going to be a long road for all of us and we really appreciate all of the love that has been shown for Kent, and for our family. We continue to remain hopeful and positive that each day will bring progress for Kent, and that with his stubborn strength he will get through this one day at a time.

Stay up to date with daily progress and photos here: https://www.facebook.com/BlueAndRedForKent