Tonya is a fabulous IM friend I met through SMO awhile back, but met in person for the first time when I was newly pregnant with the twins and she was here in Atlanta for her GS's transfer (here is Tonya's blog post from that visit)!

She is now awaiting the arrival of her little one, Greyson (who is due on Kent's birthday!), and I had asked her about a baby shower and when she said they weren't planning one I couldn't think of a better reason to have a little SMO get together in Florida than to celebrate Greyson's impending arrival with Tonya and her family!

We had settled on Saturday, September 8th as the date for the event and so after class on Thursday the 6th I packed up the car with some goodies for Tonya. I had been working on a diaper cake for about a week or two prior and I also had a bag of goodies that someone from SMO (who lives in Canada) and couldn't make it had ordered and had sent to me. I tossed in my overnight bag and then hit the road around 8:30 on Friday morning for the 7ish hour drive!

I got there mid-afternoon on Friday after a pretty nice drive down. It was long, but I had beautiful weather, a comfy car to drive in, an audio book to listen to, and was excited to get there and see Tonya and her family again! 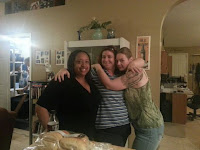 We did some last minute shopping that evening. We went to Winn-Dixie and picked up sodas, lunch meat and cheese, some colored safety pins for one of the games and a few other odds and ends we needed for the food prep. While we were there I discovered what happens when any form of Swiss cheese touches Tonya's tongue... There is mass amounts of horrible noises, gagging faces, and tongue scraping that will ensue!! :D I was also turned on to Genoa salami... YUMM-O! When we got back and had put everything away, I had the chance to meet another IM from SMO who lives very nearby Tonya. The picture above is our "Tullina Sandwich" at the "pre-party! :D We did some decorating and got everything as settled as possible for the shower on Saturday.

Saturday arrived and Tonya and I got up bright and early to make a run to Publix to pick up the cake I'd ordered over the phone a few days prior. I had NO idea what to expect! I had looked up their cakes online but they didn't seem to have any of the ones there were pictures of, so I had to take the lady's word for it when she suggested a kit they did have in stock! I was anxious to see how it'd turned out and also to make sure they had spelled Greyson's name correctly!! As you can see they did indeed spell his name right and I think it was a pretty cute cake. And most importantly it was DE-LI-CIOUS! Tonya had selected yellow cake with cream cheese icing and YUMMY that was fantastic!! 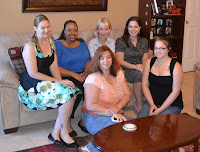 We got all the food goodies out that morning after we got back from the store with the cake, and got some coffee in our system, and then we did lots of chopping and plating. We had a tray with rolls, a tray with lunch meat, cheese and olives, a condiments server with mayo, mustard and pickles and a tray with sliced onion, tomatoes and some lettuce leaves for sandwich fixings! We had two kinds of chips, a veggie tray, a bowl of cut fresh fruit and we were all prepared and ready for the guests to arrive! Right around 11:00 the first SMOers made their appearance, Amanda and Sarah who had carpooled together. Not long after Tullina and her daughter in law arrived and we took a quick group photo!

The rest of the guests arrived soon after and pretty soon we were playing games and then watching Tonya open presents. It was wonderful to see all the goodies Tonya and John were blessed with by those who love them and wanted to join them in celebrating Greyson's impending arrival! Many were not able to be there on the day of the shower but had sent gifts prior to the party! One of the games we played was the "poopy diaper game" which I hadn't played before - it was pretty funny though. We melted 6 different mini candy bars in 6 diapers and smooshed the crud out of them til they looked like nasty little brown smears with gunk mixed in! It was totally cracking me up watching everyone sniffing the diapers with the various candy bars contained within to make their best guesses about what each one might have originally been!! I think the most correct guesses out of 6 was three - they were pretty impossible. They all smelled like chocolate diapers and that was about it! :D

The day absolutely flew by, lots of great company and conversation, good food, super yummy cake and lots of good picture opportunities!! Before I knew it the afternoon had flown by and it was creeping up on 4pm. I knew I needed to hit the road with my long drive ahead of me! Unfortunately I had worse luck on my way home than I did on my drive there - I got stuck behind a bad accident of some sort (someone told me later there was a police shoot out on the freeway!) and had to be completely routed off the freeway and take about a 10 mile back highway detour in the pitch dark and pouring rain! THANK GOD for GPS... I had a stream of traffic I was following, but I was nervous the whole time I was going to end up completely lost but eventually we made it back around to the freeway and got moving again! My eyes were pretty heavy when I finally got home around 12:30 in the morning if I remember right!

It was a wonderful visit and I am so happy I got to be there and be a part of their special day to celebrate Greyson! I think Tonya is a wonderful woman and cannot wait to hear her little man is home with her soon!!