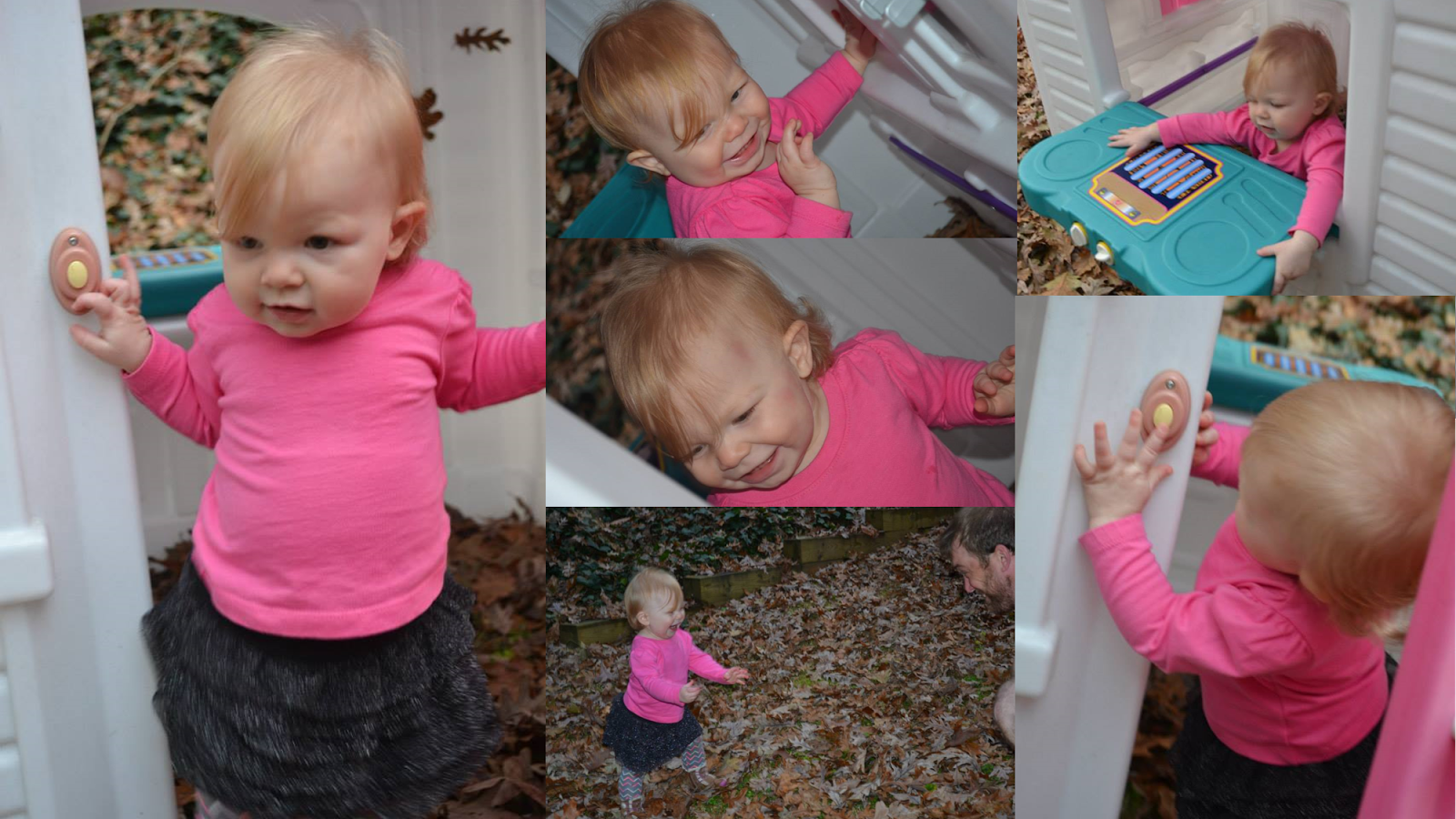 I am going to get caught up eventually! Baby girl will be 15 months old in just another couple weeks, but here is a tribute to month 14 with Miss Lindsey Rose, my punkin head.

Fun New Things: Since my last update on Lindsey, she has done a couple new things that are pretty funny. She's learning to screech and make monster noises (thank you Monsters Inc.) and she'll walk around the play room screeching sometimes when she's feeling silly and happy. She has also started doing "Baby Ghost" - she puts her blankie over her head (either she will do it herself, or hold it up for me to do it) and then walks around with her arms out in front of her. She thinks that is hilarious. 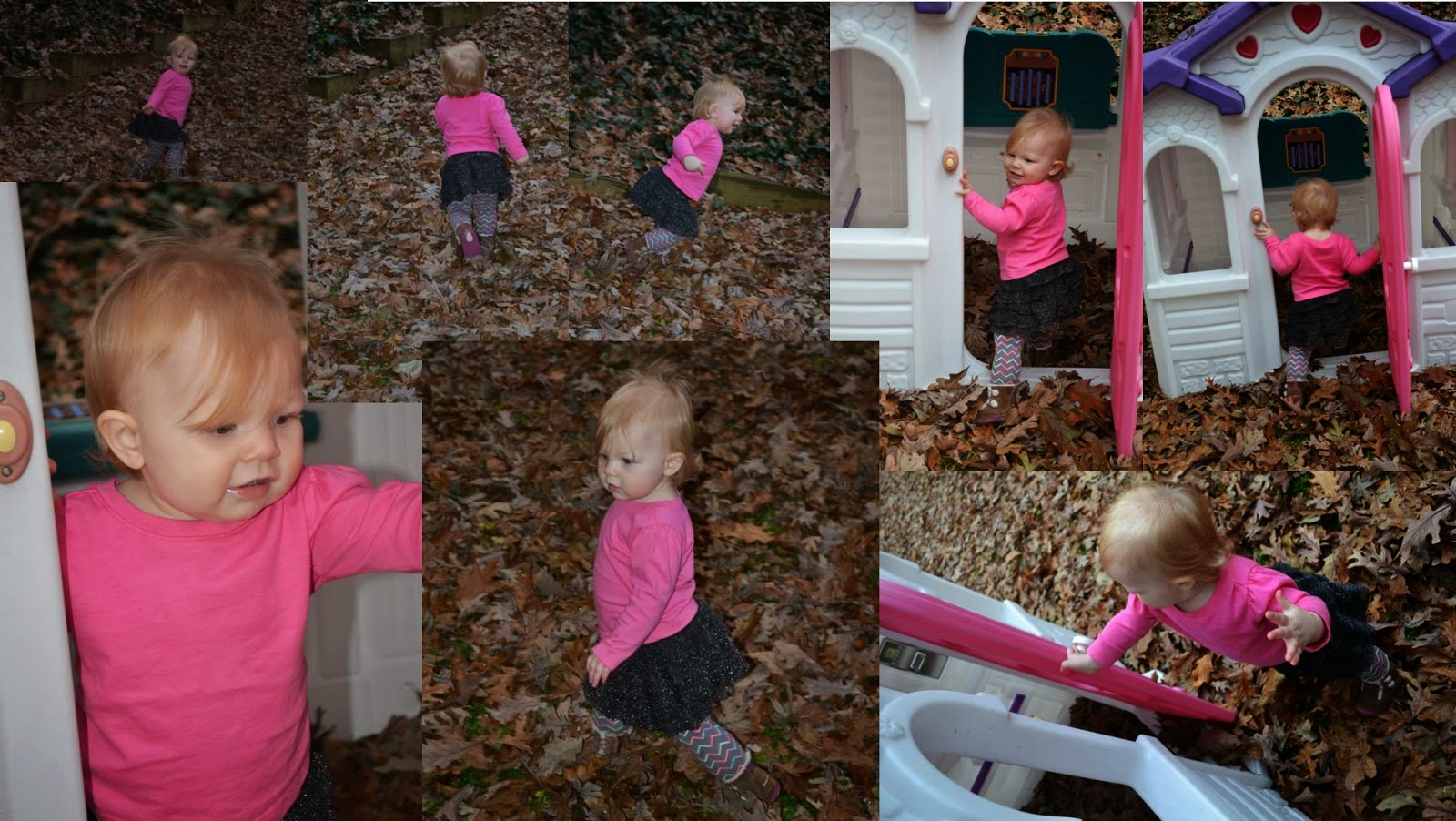 She has a special grin that is just for her daddy and it is absolutely PRECIOUS. However, she is a total mama's girl and everyone else is chop liver when I'm around. Particularly when she's upset, tired, hungry, etc. she wants mama to hold her, comfort her, and fix it. Sometimes she literally attaches herself to my leg and follows me around the kitchen and dining room... It's funny and annoying!

She has her own drawer in the kitchen - we've decided to leave one drawer that she is allowed to get into and pull things out of to play with. This seems to (usually) work pretty well to keep her from getting into the cabinets and drawers she's NOT allowed into. The drawer she is allowed in has measuring spoons, cups, and some Tupperware. She loves putting things in and out of containers right now, so she'll get a bowl or large Tupperware and put measuring spoons and cups in it, dump it out, and start all over.

She has a new tooth! Number 9 made its appearance sometime in the past week or two - I discovered it over the weekend - so we're expecting number 10 is close behind. She was up crying for over an hour last night, and I'm wondering if teething pain might be why. Poor punkin head. She is generally a good sleeper lately (praise God), so that was very unusual for her. She has a pretty set schedule of being in bed between 6:30 - 7:00pm and up between 6:00 - 7:00am the next day.

She is all about bath time and has really been into lining up her little colorful animal toys and naming them or pointing and saying "that" and then I tell her the name (she knows duck, and sometimes knows monkey and turtle, but often wants me to say it). She makes the cutest "vroom" noises for her boat and submarine toy. She is a splashing fiend! Water FLIES when Lindsey is taking a bath - and she grins and thinks it's the best thing EVER!

She is still drinking bottles because we haven't really pushed the sippy cups - however she gets both throughout the day. She only gets water in a bottle at night, and we always brush her teeth before bed so hopefully no bottle rot issues on the horizon for her. She definitely finds her bottles soothing when she's unhappy and does not feel that way about her sippy cups.

She loves making a mess with silverware, and often likes to let me scoop yogurt, soup, pasta, etc. onto the spoon then take it from me and put it into her mouth (well, it usually gets to her mouth, sometimes her cheek or her hair...)

She is a good eater and isn't all that picky (knock on wood), but I do have to be mindful of how food is presented. She doesn't like veggies on their own, but will usually eat them no problem cooked into something (like taco meat, sloppy joes, soups, stews, pasta dishes, casseroles, etc.)

I am working on a post for next month that will be a detailed list of all of her dinners for 30 days with links to recipes. It seems with toddlers we moms are ALWAYS looking for ideas and inspiration for how to feed our littles!