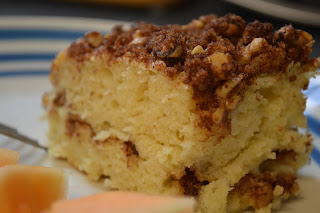 I woke up and thought I might bake some scones today, and searched through my allrecipes.com folder to see what I'd stashed away. The ones that looked good were the cinnamon sugar ones which made me think about coffee cake. That sounded even better! So I searched and found a recipe that looked like it might turn out the way I hoped and set to work. I love good coffee cake, but haven't really found any recipes that have turned out great at home so I never really know what to expect when I try a new one. This is something we make maybe once or twice a year at the most, so I always hope it will be great but have generally been mildly disappointed or fallen back on the Bisquick version, which isn't fantastic but at least I know what to expect and I do like the texture of that one.

I posted the recipe as it is originally written below, but my tweaks are as follows: I halved the recipe and baked in a 2-quart square casserole dish. I used brown sugar and added 1 TBS melted butter for the cinnamon/walnut mixture. I only used 1/2 cup o f chopped walnuts. I used light sour cream and replaced the white sugar with Stevia. I only layered twice instead of 3 times, and baked for 45 minutes. Since it was in a baking dish I didn't remove it from the pan to cool. Other than that I followed the recipe and instructions below!

The result was really delicious. I absolutely loved the way this came out. Very tender, moist and the topping was the perfect crunchy blend of cinnamon and nuts. Yumm!!

Cinnamon Coffee Cake I By: Kelsey 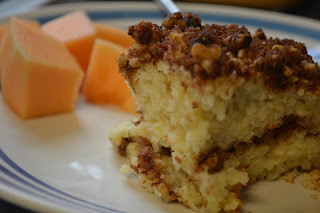