How your baby's growing:


At 11 inches (the length of a spaghetti squash) and almost 1 pound, your baby is starting to look like a miniature newborn. His lips, eyelids, and eyebrows are becoming more distinct, and he's even developing tiny tooth buds beneath his gums. His eyes have formed, but his irises (the colored part of the eye) still lack pigment. If you could see inside your womb, you'd be able to spot the fine hair (lanugo) that covers his body and the deep wrinkles on his skin, which he'll sport until he adds a padding of fat to fill them in. Inside his belly, his pancreas — essential for the production of some important hormones — is developing steadily.

Yay for baby Spaghetti Squash! Miss "S" is doing fantastic! The appointment yesterday was great. I got there a few minutes early and then my IM "L" walked in (bearing super yummy DQ icy slushies!) and not a minute or two later they called us on back! We went straight back for our ultrasound first. The tech was super nice and once we explained who was who she was all about printing out TONS of pictures for us to both have! First she did the anatomy scan and we got to see the hearts 4 chambers, the 3 vessels of the umbilical cord, both the kidneys, the stomach, all the little toes on her cute feet, lots of measurements of the femur bone, etc. Once she'd taken all the measurements we moved onto the 3-D fun stuff! Lots of fantastic shots of Miss S opening her mouth, with her arm up over her head, cute pouty lips. Super cuteness! :) She's measuring just a little ahead of her gestational age, in the 66th percentile and her heart rate was a nice steady 150 bpm. 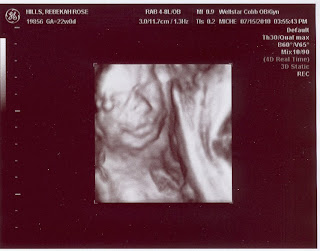 I was really happy to hear everything looks good and normal and healthy for her. We went out to the waiting room and waited a little while to be called back for the midwife check. I peed in a cup, stood on a scale and had my b/p checked then went back to the room. It was a very brief appointment! The midwife and I talked about my only two minor complaints, leg cramps and the most recent occassional heartburn I've been getting and she gave me some more suggestions and meds I can take for the heartburn (though I'd really rather not) and then pretty much sent us on our way! That was that! Our next appointment is scheduled for August 12th at 26 weeks.

Tonight I get to meet up with a good friend I met through SMO for dinner at Cracker Barrel and I can't wait!! I haven't seen her in ages plus I love Cracker Barrel - what could be better?!! I think the boys are going to order pizza - glad to know they won't starve while I'm away! :D

I'm going to pick up a lot of maternity clothes tomorrow from someone I found on Craigslist which I'm excited about - I was starting to get tired of wearing the same few pieces I have over and over. I had forgotten how much I'd sold or returned after my last pregnancy - there was only really the stuff Vicki bought for me awhile back! So it will be nice to supplement the wardrobe because I'm definitely at the point where I need to be wearing maternity! I've squeezed into a few of my skirts and tops every now and then, but they're usually fairly uncomfortable!

Looking forward to a quiet weekend with the boys and hoping we finally can get out and see a movie together this weekend! :)
Email Post
Labels: gestational surrogacy pregnancy